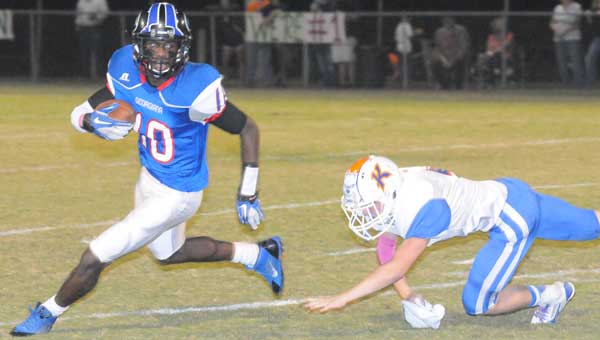 Jacquez Payton beats a man to the outside on one of the biggest runs of the night, bringing the Panthers within striking distance for their first score of the evening.

As the final seconds melted away, the Georgiana Panthers celebrated with cheers from the sidelines that haven’t been heard since 2009—“we’re going to the playoffs.”

The Panthers fended off an intimidating Kinston Bulldogs running game to hold on for a 26-18 win and a ticket to the postseason.

But the Bulldogs struck first, if late, with a time-consuming, run-oriented drive that culminated in six points with 10 minutes remaining in the second quarter.

But after a terrible kickoff that nearly gave the Panthers yardage, Jacquez Payton made magic in the backfield after dodging a tackle and making his way to the opposite side of the field, putting the Panthers within striking distance.

Alen Smith followed with a 10-yard strike to Tarien Crittenden for the Panthers’ first score.

But the Panthers’ second score would come from the defense, as linebacker Richard Boggan surged through the backfield to scoop of a fumbled snap for a 20-yard touchdown sprint.

Boggan, who proved an energized leader on the Georgiana defense all night long, said that it was a future goal that spurred him on four all four quarters.

“We’ve been working hard since this summer, so I decided why work hard and not let it pay off?” Boggan said.

“I was thinking about the playoffs and going on further, so I thought that if I picked it up and ran it, we have a better chance of winning.”

The fumble recovery for a  touchdown charged the Panthers’ defense for the remaining two quarters, and it was a performance that Georgiana head coach Ezell Powell was particularly proud of, given last year’s 41-0 loss to the very same team.

“I’m proud of watching the way they worked from December of last year to now,” Powell said.

“Last year, when we played Kinston, they were just so much more physical than we were.  They beat us all over the field.  We didn’t have a chance.  And these same young men came and hit the weight room in the offseason, and they worked, and we got out here tonight and they truly understood what the weight room meant.  They knew what Kinston did to them last time, and they were able to come out here and stand toe-to-toe with them and compete, fight and get the win.”

The Panthers consistently struggled on offense, however, which gave the Bulldogs one final opportunity to even the odds and the score with two minutes remaining on the clock.

But the Bulldogs were met with a  stingy defense that refused to yield, leading to a turnover on downs for Kinston with only 32 seconds remaining.

Powell added that he was extremely proud of his team’s defensive effort, noting that it would serve them well against tough opponents in the postseason.

But he’s not looking too far ahead.

“I don’t want to get ahead of myself and lose a ball game against Red Level or Highland Home that we have a chance to win,” Powell said.

“We want to take it a week at a time and when playoff time hits, we’ll be 110 percent on it and go out to wherever we’ve got to go and get a win.”

Following a bye week, the Panthers face the Red Level Tigers for homecoming on Friday, Oct. 24 at 7 p.m.