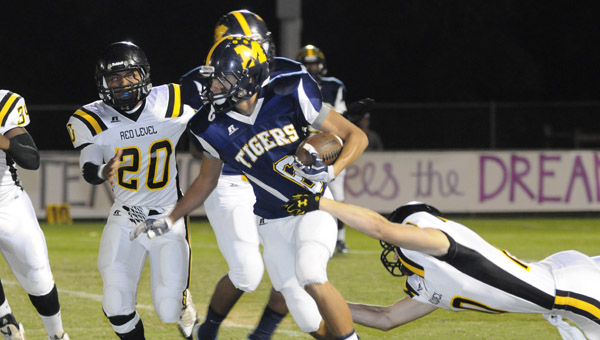 The McKenzie Tigers secured their sixth consecutive win on the season in convincing fashion with a 40-12 victory over the Red Level Tigers.

But while McKenzie head coach Josh McLendon might have been happy with the destination, he certainly wasn’t pleased with the journey his team took to get there.

McKenzie took the reigns early in the first, led by a 25-yard dash up the middle from running back Chris Shufford for an early 8-0 lead.

After recovering a fumble on the Red Level 29 yard line, McKenzie quarterback Terrance Clemons lowered his head and surged through the line to pick up the second score of the night.

Red Level dominated time of possession in the second quarter, though failed to show anything for their troubles after a turnover on downs gave the ball back to McKenzie with two minutes and change remaining in the half.

Receivers Seth Collin Keeney and Condie Pugh took the Tigers coast to coast in seconds, setting up Clemons for another 1-yard dive for a touchdown and a comfortable 22-0 lead.

And though McKenzie remained firmly in control of the scoreboard, it was an error-riddled third quarter with three fumbles—one lost for a Red Level touchdown—that gave McLendon pause.

“Good football teams don’t play down to their competition,” McLendon said to his players after the game.

McLendon noted turnovers, missed tackles and an overall lack of enthusiasm that disappointed him most, but next week provides an opportunity to turn Friday night’s shortcomings into Monday’s successes.

“It’s good that we have a game like this where we can watch film and we can see all of those mistakes on film,” McLendon added.

“You can learn a lot from your mistakes.  We’re going to go out and figure out what we’ve got to do, and we’re going to come back and do it. We’re going to have to play a lot better than we played tonight, or it’s not going to be very much fun next week.”

McKenzie rushed for 256 total yards on 31 carries, and was three for eight in the air for 78 yards.

Shufford finished the night with three rushing touchdowns, and Clemons tacked on two of his own.

The Tigers travel to Florala Friday for the team’s second-to-last region game of the season.