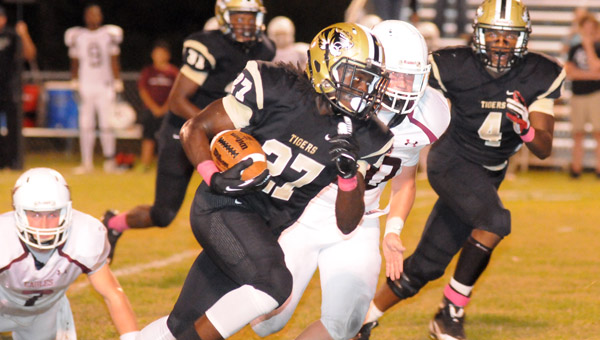 Members of the Greenville High School Class of 1994 that attended Friday night’s homecoming game may have felt like they were transported back in time.

That’s because the newest edition of the Tigers looked almost as dominant as the 1994 Tigers, who posted a 13-1 record on their way to the Class 5A state championship.

Greenville (4-2, 3-0 Class 5A, Region 2) defeated region foe Alabama Christian Academy 62-20 in a game that was even more lopsided than the score indicates.

It took Greenville just 1:29 to score its first touchdown of the game, and it proved to a sign of things to come.

But the Greenville attack wasn’t limited to the air.

The Tiger speedster got his first touchdown of the contest when he gashed the Eagles’ defense for a 70-yard scoring run to give the Tigers a 14-0 lead with 4:37 remaining in the first stanza.

The score was the first of two on the night for Posey, who added a 35-yard touchdown run midway through the second quarter. The senior looked to be on his way to a career night before suffering a knee injury early in the third quarter.

Greenville added a defensive touchdown and a special teams touchdown for good measure.

Senior linebacker Parrish Patton scooped up a ACA fumble and rambled 29 yards for a touchdown near the end of the third quarter.

Junior Mark Bradley ran a kick back 80 yards for a touchdown at the 7:18 mark of the third quarter.

In their last two games, the Tigers have scored a combined 123 points, while allowing just 34.

On Friday, the Tigers didn’t allow the Eagles (3-4, 1-3 Class 5A, Region 2) into the end zone until the second half, and the Greenville first-team defense didn’t allow a score.

“Overall we did a good job tonight, but in the second half we didn’t focus,” first year head coach Patrick Plott said. “We talked about that at halftime. We’ve got come back out focused.”

The Tigers will be back in action next Friday when they travel to Montgomery to take on Sidney Lanier High School. Kickoff is set for 7 p.m.