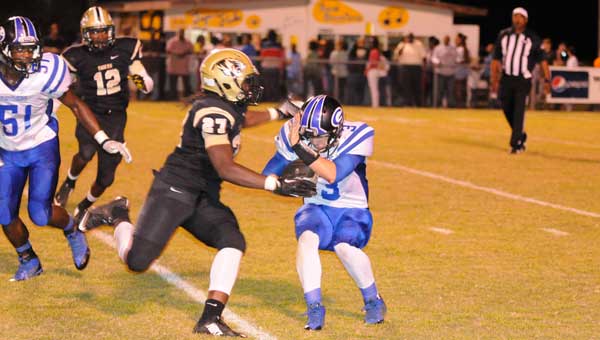 Greenville linebacker Parrish Patton was a constant factor in the Georgiana backfield in Friday night’s 61-14 win over the Panthers.

It was difficult to tell that Greenville was down a starting quarterback as the Tigers handed the Georgiana Panthers their third straight loss in convincing fashion with a 61-14 win.

The Panthers struggled early and often to find an answer to a suffocating Tigers defense in the first half, but Greenville quarterback Brandon Simmons had much more luck with a talented crop of receivers in Javorris Cheatham, Myles Haynes and Ra’heem Moore.

But the first Tigers touchdown was a ground assault from senior running back Alyric Posey on a 30-yard mad dash down the sideline for an early 6-0 lead.

Cheatham, Haynes and Moore would each follow up with touchdown catches of their own to put the Tigers ahead comfortably 32-0 in the first half.

Greenville head football coach Patrick Plott said that he was impressed, but not surprised, by his players’ performance.

“We blocked well up front, Brandon made his reads and made the right throws to the right people and the receivers caught the ball,” Plott said.

Georgiana head football coach Ezell Powell had a simple message for his team at the half—compete.

“We put ourselves in a big hole right here, and the only thing that would get us back in the ball game is to just slowly chip away at the lead,” Powell said.

The Panthers found a spark by punishing a blown assignment as quarterback Alen Smith found a wide-open Tarien Crittenden for Georgiana’s first score of the night.

A fired-up Panthers special teams unit deflected a Greenville punt on the following drive, which was recovered by Demarcus Rich and taken to the house for Georgiana’s second score.But the Panthers were a little too fired up on the ensuing kickoff, as a post-play tussle between the two teams cost Georgiana several yards in penalties and, much more importantly, three ejected players.

But misfortune also struck the Tigers late in the second half as junior running back Skilar Moorer was hit low on a punt return, taking him out of action for the rest of the night and the foreseeable future.

“That’s going to be a big adjustment, but hopefully he’ll be fine and get well soon and we’ll just have to keep working guys to try to fill his shoes until then,” Plott said.

The Panthers aim to right the ship Friday with regional opponent Pleasant Home, as the Tigers reenter region play with Alabama Christian.

The typically high-powered McKenzie offense has averaged nearly 48 points across their first four wins this season, but the Tigers... read more