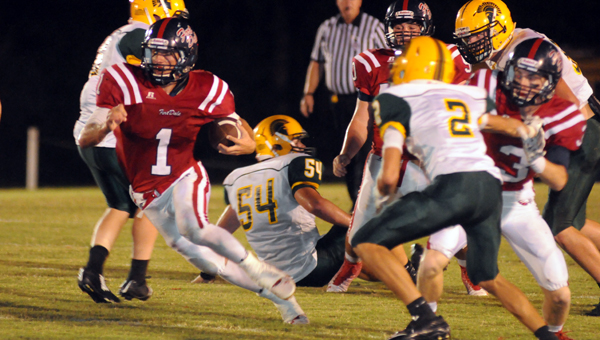 Fort Dale made proved early that it was going to play a physical brand of ball.

The Eagles (2-3, 0-2 Class AAA, Region 1) rushed the ball on seven consecutive plays during the opening drive of the game. Senior Sawyer Kendrick, who finished with 55 yards on 10 carries, capped the drive with a 15-yard scoring run. Senior Ryan Burkett, who rushed for a team-best 148 yards on 24 carries, punched in the two-point conversion for an 8-0 lead.

The Eagles then got a little help on special teams on the ensuing kickoff when junior Cody Parker pounced on a loose ball giving the Eagles a first down on the Sparta 39 yard line. The fumble recovery set up a 29-yard touchdown run by junior quarterback Austin Vickery, which gave the Eagles a 14-0 lead.

The Eagles extended their lead when Burkett broke free on a fourth-and-4 play for a 15-yard touchdown with 4:25 to play in the half. Kendrick added another score with 1:38 remaining in the half to give Fort Dale a 27-0 lead.

Sparta responded with a touchdown at the 12-second mark to cut the lead to 27-6 at the half, but never seriously threatened Fort Dale.

“We got off to a pretty good start tonight,” Sampley said. “We gave up that long pass play at the end of the half and we had some stupid penalties, but we played hard, and we made up our mind that we were going to run the ball and we were able to do that.”

Fort Dale added its final touchdown with 1:59 to play in the third quarter when Vickery connected with Kendrick for a 45-yard touchdown.

Kendrick had three catches for 76 yards.

Friday’s win snapped a three-game losing skid for the Eagles, in which they have allowed at least 41 points in each of the three losses.

“Defensively we played better,” Sampley said. “We played hard. We still aren’t tackling like we need to be, but we played hard and I thought we did some good things.”

Parker led the Eagles with 12 tackles, while sophomore Clay Mansmann had 10 tackles and a fumble recovery.

The Eagles will be back in action next Friday when they host region rival Hooper Academy. Kickoff is set for 7 p.m.

Hwashin America, a Tier I supplier for Hyundai and Kia, plans to spend $9 million on new manufacturing equipment. On... read more