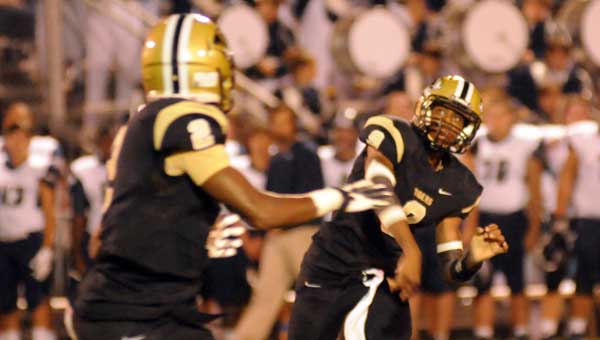 The Greenville Tigers will face the Georgiana Panthers wilthout the aid of their starting quarterback, D’raylen McGrew.

Friday night’s non-region game between the 5A Greenville Tigers and the 1A Georgiana Panthers will be the first in seven years, and only the third since 1984.

It’s been even longer since the Panthers came out victorious, with the last Georgiana win recorded in the books on November 16, 1979.

To some, there is little difference between the Georgiana and Greenville matchup and the tale of David and Goliath—one is an underdog story of biblical proportions and the other is a non-region game between 1A and 5A schools.

But no one in either the Georgiana or Greenville camps see it that way.

“We’re just trying to compete,” said Georgiana head coach Ezell Powell, who added that the goal each week never changes regardless of the opponent.

“We’ve come off two losses in a row.  With Brantley, we played well, but with McKenzie we did not play well at all.  So we just want to go out and execute and try to get a little confidence back and finish the season strong.”

“We’re not looking at it that way because we know they’re going to come in fired up,” Plott said.

“I’m looking to see them come out with a fresh, new energy.  Coach Powell is going to do a good job of getting those guys ready this week and rebound off the two losses and try to get back in the win column.”

The two teams have faced their own share of adversity this season, with Georgiana’s most recent plight coming in the form starting quarterback Alen Smith’s injury from Friday night’s bout with McKenzie.

But Powell said that he is cleared to go for Friday.

“He would tell you himself that he didn’t have his best game on Friday night,” Powell said.

“But that’s the nature of this game.  You’re going to have some good days and some bad days, so we’re just going to have to put together some more consistent good days, especially on Friday night, in order to win.”

The Tigers have had some quarterback troubles of their own, with D’raylen McGrew suffering a shoulder injury in the first quarter of last Friday’s game with Alma Bryant.

Plott said that McGrew won’t play in Friday’s game, but that backup quarterback Brandon Simmons has seen more than his share of playing time.

“Brandon came in Friday and did a good job for us, and I think he’ll do even better this Friday night now that he’s gotten his feet wet in a regular season ball game,” Plott said.

“He’s got that experience of everything moving fast around him, and I think he’ll be ready.”

Plott added that Georgiana’s Jacquez Payton could prove problematic for the Tigers defense, due to his multifaceted role on the Panthers offense.

But the biggest challenge for the Tigers is the one they present to themselves.

“Our goals each week are to continue getting better and to grow as a team,” Plott said.

“Even though we haven’t won every ballgame, we’re growing as a team and getting better.”

The in-county rivalry between the Tigers and the Panthers will kick off at Tiger Stadium at 7 p.m.