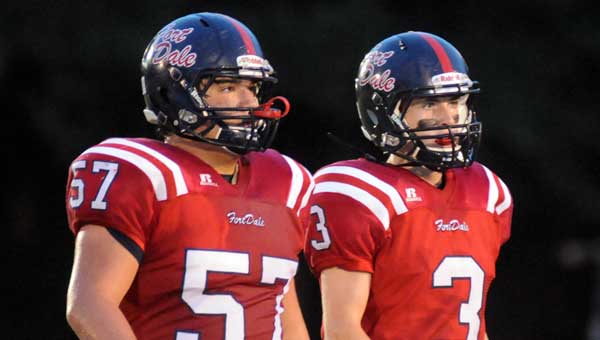 The Fort Dale Academy Eagles face the Sparta Academy Warriors Friday night for homecoming, and the stakes have rarely been as high for a win.

But it’s not for the reasons one might suspect.

First of all, it’s certainly not because of the pressures of homecoming week.

“It’s a detriment in the sense that they don’t concentrate well because there are so many things going on.

“We do skits, we do cheers for each class, we have a gridiron supper on Thursday night—it’s just distractions.”

A tough test stands in front of the Eagles in the form of the undefeated Sparta Academy Warriors, who have earned three of their four victories in convincing fashion—the Warriors ran away with wins against Southern Academy and South Montgomery Academy with 40-0 and 47-0 margins respectively.

Coupled with the Eagles own struggles early this season, it’s not difficult to see how Friday could prove stressful for Sampley.

But he has faith in not only his Eagles’ talent on the field, but also in their work ethic.

“Their quarterback has a lot of yards both throwing and running.

“We obviously are struggling a little bit.  We are 1-3, and we’ve played some good football teams.  I think we’re playing hard.  I think we’re trying to get better every day.  But it’s homecoming and that takes a little bit away from your focus and we’ve got to be focused for Friday night because the most important thing that happens Friday night is the football game.”

The Warriors have averaged 43.5 points across their first four games of the season, a tall order to match on any given Friday for any team.

Sampley added that in addition to limiting the usefulness of the Warriors’ quarterback, the Eagles have to create offensive opportunities to be successful.

And that is a responsibility that isn’t limited to the Fort Dale offense.

“We’ve got to tackle better—we haven’t tackled well in any game,” Sampley added.

“Offensively, we’ve got to sustain drives.  We’re moving the football at times, but we’re not moving it consistently.  If we don’t do that, you’re not going to score many points.”

Fort Dale is set to square off with the non-region Sparta Academy Warriors Friday night at 7 p.m.