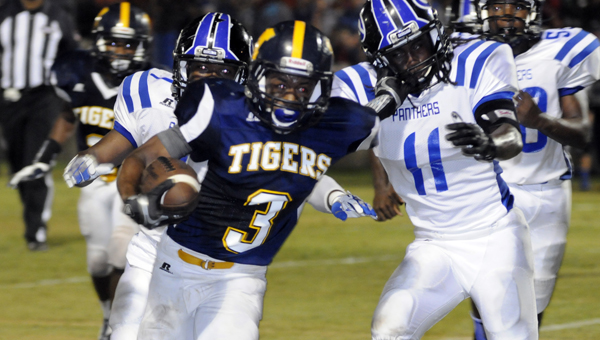 For the first time in five weeks, the McKenzie Tigers were able to do something that no other team this year has accomplished — they ground the powerhouse Georgiana Panthers offense to a halt in a convincing 46-12 win over their in-county rival.

But for the first six minutes, neither team managed to put together a successful drive.  It wasn’t until an 80-yard strike to wide receiver Carrington Bonick broke the silence for the Tigers, setting up Ty Adams for the quick jaunt into the end zone for the Tigers’ first score.

But the Panthers would answer just minutes later with a Hail Mary of their own to Jacquez Payton, who beat Condie Pugh in a foot race to the end zone to tie the game at 6 all.

But the Panthers would fumble on their third attempt for the first of several Georgiana miscues, and William Brown would make the Panthers defense pay by coming down with a huge catch mere feet from the end zone.

McKenzie quarterback Terrance Clemons scrambled into the end zone a touch later to put the Tigers up 14-6.

But the nail in the coffin came with only 27 seconds remaining in the half, in which Chris Shufford punished a poor decision to throw into double coverage by taking an interception—his first of three on the night—coast to coast for a Tigers touchdown and a comfortable 26-6 lead.

Shufford was productive in nearly every facet of the game, but his presence was felt most on defense with three interceptions, two of them taken all the way to the house for touchdowns.

Shufford added that it was preparation that gave him the edge in reading the quarterback’s tendencies.

“We watched film earlier, and you can see the quarterback’s eyes,” Shufford said.

“He’ll look at who he’ll be throwing to, so I just rolled over.”

The second half proved just as disastrous for the Panthers, who lost their starting quarterback, Alen Smith, to an injury sustained in the final moments of the first half.

He was rushed to the emergency room after a bone-crunching hit to rule out whether he’d sustained a broken or bruised rib.  His status for next week remains unknown.

However, it was special teams, and not offense, that proved the Panthers’ bane all night as Georgiana failed to recover three onside kicks, keeping the ball—and momentum—firmly on McKenzie’s side.

But McKenzie head football coach Josh McLendon said that the turnovers weren’t a part of the plan, but a happy coincidence.

“It’s not really an onside kick.  It’s more a respect for No. 10 (Jacquez Payton),” McLendon said.

“We know that he’s such a big-time player that we knew we couldn’t kick it deep to him because he’s a game changer.  Our plan was to kick it low and we were fortunate enough to get a couple of bounces to go our way, and it really kind of kept the momentum on our side.  That really was not planned, but it worked out on our side.”

Georgiana head football coach Ezell Powell said that it was more than momentum that allowed McKenzie to win in such convincing fashion.

“They were just more physical than we were,” Powell said.

“We’ve just got to believe in what we’re doing, continue to eliminate mistakes and go out and compete.  That’s the nature of this here game.  We’ve just got to get more physical.  We just weren’t physical tonight.  They were, and they kicked our tails real good.”

The undefeated Tigers aim to keep the streak alive Friday at Hilcrest-Evergreen, while the Panthers look to bounce back in another in-county contest at Greenville.