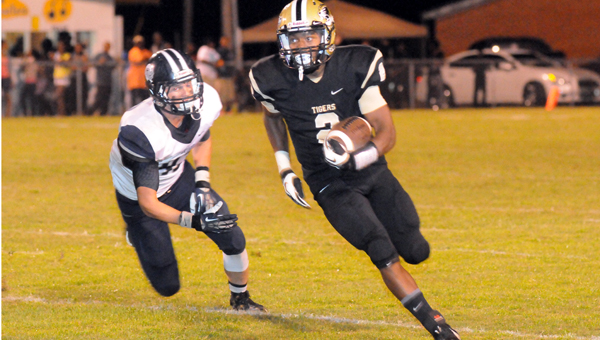 More stinging than the loss on the scoreboard was the loss of starting quarterback D’raylen McGrew.

McGrew was knocked out of the game with 3:57 remaining in the first quarter. He was taken to L.V. Stabler Memorial Hospital to be examined.

According to McGrew, doctors said the senior signal caller suffered an AC joint separation. McGrew said he is unsure of when he will be able to return to the field.

“They said it’s week-to-week,” McGrew said. “It depends on how much pain I can tolerate.”

While Greenville backup quarterback Brandon Simmons led the Tigers on a scoring drive late in the third quarter, the Tigers (2-2, 2-0 Class 5A, Region 2) struggled on offense after McGrew’s departure.

“That was a big blow,” Greenville head coach Patrick Plott said. “He’s our leader on offense. Once you lose your leader, it’s hard to get back on track.”

Following McGrew’s injury, the Tigers turned the ball over four times, including a fumble in the end zone that resulted in a safety.

The Tigers led 8-0 when McGrew left the game.

The senior quarterback had thrown a 20-yard strike to senior wide receiver Ra’heem Moore for Greenville’s first offensive points of the night.

The Tigers had already scored on a safety after the defense forced a punt attempt in the shadow of Alma Bryant’s goalpost. The snap sailed high and out of the end zone giving Greenville a 2-0 lead with 10:33 to play in the first half.

Alma Bryant quarterback Rydarian Bowie gave the Hurricanes the lead for the first time with 3:48 to play in the first half when he scrambled for a score.

Greenville recaptured the lead with 55 seconds to play in the third quarter when Simmons found Moore for a 17-yard touchdown pass.

The lead was short lived, however, as Bowie ran for his second touchdown with 9:28 remaining in the fourth quarter.

Greenville’s defense, which created two turnovers on the night, forced the Hurricanes (1-4, 0-3 Class 7A, Region 1) to turn the ball over on downs with 4:14 left to play, but Greenville’s drive came to an end with an interception at midfield. The Hurricanes were then able to run out the clock and seal the win.

“I thought our defense played well,” Plott said. “Our offense didn’t do enough to keep them off the field. They were out there too much and just got worn down as the game went on.”

Greenville junior defensive back JaQuan Lewis had a fumble recovery for the Tigers, and senior linebacker Parrish Patton intercepted a pass for Greenville.

The Tigers will be back in action next Friday when they take on in-county rival Georgiana School. The game will be played at Tiger Stadium.