Cougars too much for Eagles 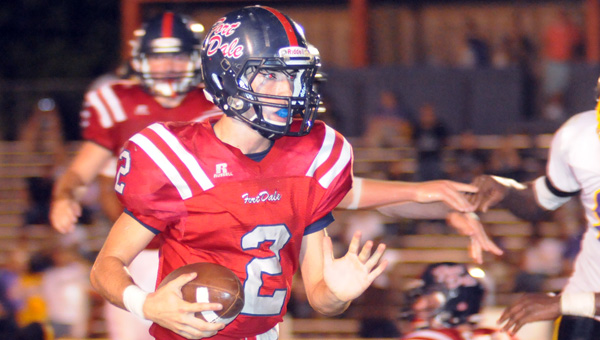 It proved to a sign of things to come, as Escambia would go on to claim a 54-12 victory.

The Cougars would get their second big special teams play of the night just four plays later.

After forcing the Eagles to punt, Escambia recorded a safety when the snap sailed high on the punt attempt.

Just like that the Cougars led 9-0 just less than three minutes into the game.

“Special teams has been a strength for us all season long,” EA coach Hugh Fountain said. “The past two years against Fort Dale have been nail-biting finishes, and we talked about wanting to have a strong start this year so we wouldn’t have another nail-biting ending.”

By the close of the first quarter Escambia led 29-6. By halftime the Cougars had pushed that lead to 35-6.

Senior Sawyer Kendrick scored both of Fort Dale’s touchdowns. He scored on a 1-yard run and also returned a fumble 25 yards for a score.

The Eagles finished with 129 yards rushing and 82 yards passing.

The Eagles will be back in action next Friday when they take on Class AA Wilcox Academy.