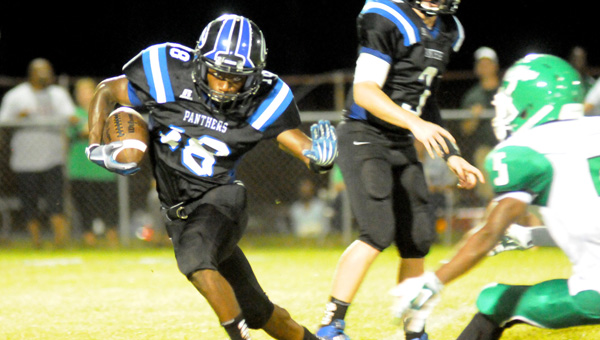 For 40 minutes and 19 seconds, the Georgiana Panthers were well on their way to a 4-0 start and a win against one of the biggest 1A threats of the past several years.

But the Brantley Bulldogs found a way to turn the tide, along with a collective second wind, to steal a 44-40 victory at Harmon Field after trailing 28-8 at the half.

But the first half belonged solely to Georgiana, and it began with the gutsiest of calls—a fake punt dialed up by Georgiana head football coach Ezell Powell.

The fake-out turned a three-and-out situation into a touchdown pass to receiver Jacquez Payton, his first of several on the night, after a downfield collision between two Brantley defenders left his path to pay dirt clear.

Powell said it was faith that made his risky decision an easy one.

“I believe in my kids, bottom line and point blank,” Powell said.

“And so when we’re in a fourth and two or fourth and three situation, I go for it. So when I called it then, I felt really good that the guy whose hands I was going to put the ball in could get it for me. Plus, early in the ball game, we didn’t come to lose.”

Brantley struggled early and often, with three botched snaps and a host of drive-killing penalties, but the biggest offense came in the form of a fumble recovered by linebacker Cameron Longmire that gave the Panthers momentum and another shot at the end zone to go up 14-0.

But at the top of the second quarter, Brantley wide receiver Kaisaun Nichola broke at least three tackles for a 30-yard tiptoe down the sideline for the first Bulldogs score of the night.
But moments later, the Panthers found an explosive answer in Quentarius Hawkins’ burst down the field for a 65-yard touchdown.

Payton poured it on, this time from the quarterback position, on a 41-yard keeper to the end zone for a comfortable 28-8 lead.

But the Bulldogs returned to the field after the half looking like an entirely different football team, led by senior running back Brandon Walker who bulldozed over the Panthers for the entirety of the second half.

In the blink of an eye, the Bulldogs mounted a 16-0 run to cut the lead to 12 in the wake of Walker and tight end Darian Jones’ two scores.

But the incredible comeback culminated on a brilliant cutback from Nichola on a play that could’ve been cut short in the backfield, instead resulting in a touchdown run and a 38-34 lead for Brantley.

A crucial defensive stop gave the Panthers another shot at life with three minutes and 40 seconds remaining in the game, but a botched snap deep in their own territory resulted in a Brantley touchdown to go up 44-34 for their biggest lead of the night.

Running back Jay Williams gave the Panthers one last chance after coming down with a huge catch, dragging a defender five yards to the end zone to cut the lead to four.

Unfortunately for the Panthers, a failed onside kick attempt left the Bulldogs in control of the clock and Georgiana without a timeout.

Despite the disheartening loss, Powell said that
he was extremely proud of his players’ monumental effort.

“These guys have a little bit more heart about them. When they put that uniform on now, they understand what Georgiana on one side and Panthers on the other side means, and we fight for those words every time we step on the field.”

But the Panthers have little time to recover as next week sees Georgiana going up against in-county rival McKenzie.

“We’re ready to turn the tables—I’ll just say it that way,” Powell said.

“Yeah, that’s a personal one, and we want it. And we’re going to go down there to try to get it.”

The region rivalry is slated for next Friday in McKenzie.