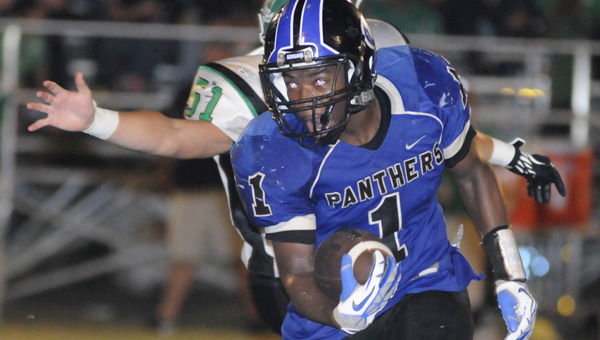 Ninth-grade running back Cameron Longmire is one of several Panthers looking for a regional rematch against the Brantley Bulldogs Friday.

The lean, mean, green machine that is the Brantley Bulldogs football team is coming to Georgiana Friday in search of a region win.

The 1A powerhouse has been a source of fear and respect for the past several years, but Georgiana head football coach Ezell Powell said that the two aren’t necessarily the same thing.

“We don’t ever fear a team, but we respect Brantley and what they do,” Powell said.

“We understand that we’re not the same ball team we were last year.  We’re trying to prove our relevance here once again, so we’re going to go out and compete and do the best we can, and see what happens.”

The Panthers have done an admirable job of proving their worth in the region so far, outgunning opponents 118-9 in the first three games of the season.

The high-powered start marks the Panthers best start to a season in 14 years.

But an error-riddled start to last week’s match with Florala gave Powell cause for concern.

To that end, eliminating “bone-headed” and “drive-killing” penalties will be the recurring theme of this week’s practices, as well as bracing for Brantley’s intimidating front line.

“We have to understand what they’re going to do to us defensively and we’ve got to be able to block those big, quick linemen up front,” Powell added.

“We just have to do the fundamental things that helped us be successful in the first three ballgames.

“We also have to understand that they have speed just like we have speed.  If we’d broken into the open field against our previous three opponents, it may have gone for a touchdown.  We understand that against Brantley, it may be a 15-20 yard gain.”

But Brantley is only the beginning of a tough stretch of road on the path to improvement.

McKenzie, Georgiana and Kinston round out a list of local and regional opponents.

Powell added that this four-game period is the true measuring stick by which his team’s progress will be judged.

“It doesn’t get any easier for us,” Powell said.

“This team will learn a lot about themselves over the next few weeks of football because, if they can go into these ballgames and compete the way they’ve done, we know that we’re headed in the direction we want to go.”

The Panthers will kick off their four-game gauntlet of tough opponents with the Bulldogs at home Friday beginning at 7 p.m.