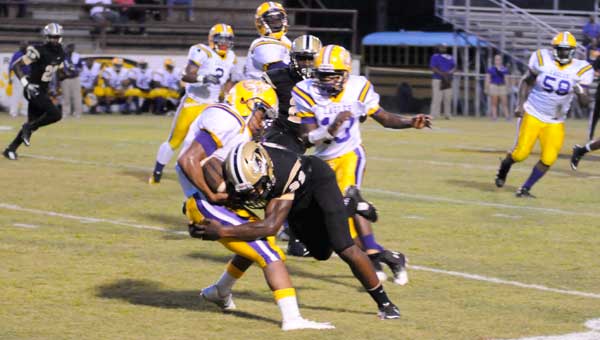 Chardarrius Davison was one of several Tigers who maintained a consistent presence in the Booker T. Washington backfield on a stop for a loss.

And though the Tigers fell well short of that mark on week one, the team nearly accomplished as many points per half Friday night as Greenville routed Booker T. Washington Golden Eagles 58-14.

It was off to the races from the very outside for the Tigers as excellent field position set up Skilar Moorer for a 16-yard spring up the middle unscathed for the first score of the night.

It was déjà vu on the Tigers’ second attempt, beginning the drive on the Golden Eagles’ 39 yard line made for wide receiver Cordell Plott’s quick jaunt down the sideline to put the Tigers ahead 13-0.

Plott said that the recipe for victory was the combined effort of all 11 players on offense.

“Our big reason for success was just everybody doing their job on offense,” Plott said.

“That’s the key.  Last week, we missed a lot of assignments, and this week we got all of that corrected, and we played better on offense.”

Meanwhile, the Golden Eagles struggled to respond with an offense plagued by false starts.

Just as the Golden Eagles began to build steam to close the half, defensive back JaQuan Lewis came down with a momentum-stealing interception returned for a 69-yard touchdown to extend the lead to 33-0.

In the first half alone, the Tigers scored on offense, defense and special teams, and Plott said that it was balance that would prove the key to success down the road for Greenville.

“If you can be good on offense, defense and special teams, you’re going to be tough to beat,” Plott added.

The Tigers showed zero signs of slowing down in the second half, proving that the depth chart ran deep enough with talent to pose an offensive threat even with most of the starting squad on the sidelines.

Backup quarterback Brandon Simmons took matters into his own hands on with a 10-yard contact-filled burst to paydirt to go up 45-0.

Not until there were five minutes remaining in the fourth quarter were the Golden Eagles able to respond with their first score of the night, but the difference was too much to overcome.

Plott added that he was proud of his second stringers, but not necessarily surprised.

“I thought those guys played well, and they had a great week of practice, as well. When those guys get in there, we expect them to do the same things that our first string does.”

The Tigers face a tougher challenge on the road next week in the 2013 Super-Six runners-up Charles Henderson Trojans.