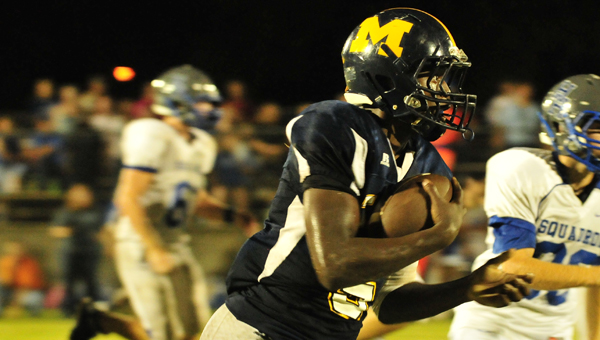 McKenzie School’s high-octane offense sputtered early, but once it warmed up the Tigers raced past Pleasant Home High School Friday night in Andalusia.

PHS started off the night with a strong drive but stalled out on the 3-yard line and Garrett Barton split the uprights on a 20-yard field goal to give the Eagles an early 3-0 lead.

“I wasn’t real happy with the way we started,” McKenzie School head coach Josh McLendon said. “We came out and put ourselves behind the ball by not executing on offense. We had some bad snaps and a few negative plays that put us in bad situations. We eventually got things going on offense and we’re able to do what we wanted to do.”

The Tigers used a 33-yard pass to Condie Pugh to set up a read option that Clemons kept and took 13 yards for the score. The Tigers tacked on a two-point conversion to take a 16-3 lead.

The Tigers’ defense wasn’t letting up and forced a three-and-out from the Eagles’ offense and then two plays later Clemons threw a dart to William Brown, who raced up the sideline 87 yards for the touchdown.

On the ensuing kickoff Pleasant Home’s Justin Helms made what looked like it was going to be a long return but he was hit hard from behind, jarring the ball loose, and the Tigers pounced on the loose ball. A few plays later Clemons went 13-yards untouched for his second touchdown run of the night. A missed extra point attempt left the Tigers leading the Eagles 28-3.

One play into the Eagles’ next drive Reid Adams was popped hard and lost the ball and the Tigers were all over it. McKenzie’s Ty Adams took a handoff from Clemons on the Tigers’ next play and went 37 yards to set up a 3-yard touchdown pass from Clemons to Chris Shufford.

Pleasant Home opened the third quarter with an impressive 65-yard scoring drive that was capped off by a quarterback sweep by Garrett Barton, who forced his way through the defense for a 22-yard touchdown run.

While the offense has in some ways stolen the show, McLendon said McKenzie’s defense was the real star.

“They kept us in the game early,” he said. “I was real proud of the way they responded. We struggled early on offense and they got stops and got us the ball back and help (Pleasant Home) until we could get things figured out.”

In the first two games of the season, McKenzie defense has allowed just 23 points.

McKenzie (2-0, 1-0 Class 1A, Region 2) will be back on the road next Friday when it travels to face Kinston High School.

Andy Brown contributed to this report.