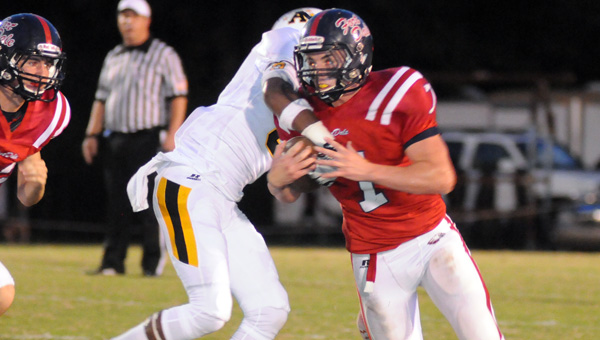 After a blowout win over Evangel Christian Academy in the season opener, Fort Dale Academy head coach James “Speed” Sampley made a promise to his team.

Things would get much tougher in Week 2.

That certainly proved to be the case Friday night as 10th-ranked Autauga Academy ran wild en route to a 47-7 victory.

Autauga senior running back Eric Graham led the way, marching up and down the field nearly at will and scoring on runs of 54, 10, 23 and 10 yards.

Three of Graham’s touchdowns were set up by Fort Dale turnovers.

“You can’t shoot yourself in the foot like that and hope to play with a team that good,” Sampley said. “We’ve got to hang onto the football.”

Fort Dale’s lone score came with 1:52 remaining in the third quarter when senior running back Caleb Whigham barreled his way into the end zone from three yards out.

Jake Gillem split the uprights on the point after try. At that point the Eagles trailed 33-7.

“We’ve got to be able to sustain some kind of momentum,” Sampley said. “We didn’t do that tonight. We can’t get down when things don’t go our way. That’s the worst thing we could do.”

The Eagles managed just 177 yards of total offense after failing to gain a single yard through the air.

Following the game, Sampley reminded his team that it’s not how they start the season but how they finish. To hammer the point home, he pointed out that in 2010, Fort Dale lost to Monroe Academy 40-14 at home in Week 6 of the season. Seven weeks later, the Eagles topped the Vols 49-21 to claim the state championship.

“I’ve been through this before,” he said. “Several years ago, I had a team here that lost a game worse than this right here on this field. That team went on to win the state championship because they got better as the season went on. We’ve got to go back to work and make sure we’re getting better every week.”

Things won’t get an easier for the Eagles (1-1, 0-1 Class AAA, Region 1) next week as they travel to Atmore to take on Escambia Academy.

The sixth-ranked Cougars opened the season by knocking off Autauga 21-20 and had a bye week in Week 2.

Kickoff for the Eagles’ showdown with the Cougars is set for 7 p.m.