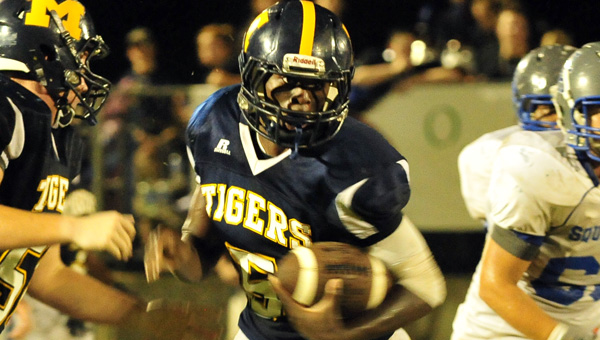 McKenzie School literally ran all over the Highland Home Flying Squadron Friday night with a  convincing 48-14 win to kick off its 2014 campaign.

But McKenzie head football coach Josh McLendon said that it was the team’s defense that pleased him the most.

“I thought we had a really good game plan defensively.  Coach Norris and Coach Coghlan did a good job all week of game-planning,” McLendon said. “We preach to our guys that once we get somebody down, we want to keep them down.  I thought we did a good job of staying on top of them and letting them have a chance to breathe.”

The first Tigers’ possession ended with a punt, but McKenzie would find nothing but success in the drives to follow, including a second possession topped off with a 52-yard run from Carrington Bonnick for a touchdown.

A second score on a lengthy, time-consuming drive gave McKenzie a 14-0 lead at the half, but the Tigers were just getting started.

Ty Adams contributed a second-half score with a 4yard waltz into the end zone.

Quarterback Terrance Clemons got free in the backfield and broke out on a 64-yard streak downfield for another late-game score.

Chris Shufford added a n11-yard run for yet another score in the second half, but McLendon remarked that Shufford’s biggest contribution was on defense.

“Chris Shufford played unbelievably hard on defense,” McLendon said. “He had 15 solo tackles on defense.  He’s a heck of a football player.”

Though the first game of the season wasn’t a region game, McLendon said that it was pivotal to start the season off on the right foot.

“It’s always good to get the first one under your belt,” he said. “We wanted to come out and play hard.  We played at home and we wanted to set the tone early, and I thought we did that on defense, and we created some turnovers early. I’m really proud of our guys. They played well and they played hard; it was a good night for us.”

The Tigers aim to duplicate their success next week with the first region game of the season against Pleasant Home in Andalusia.