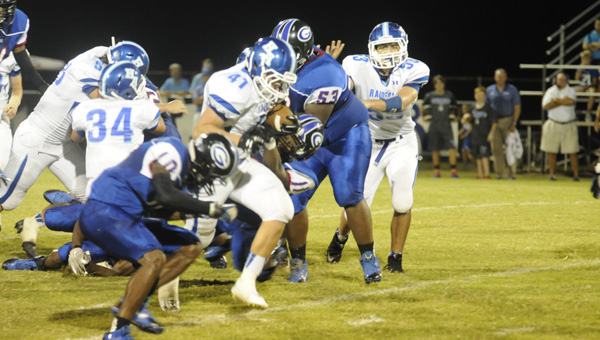 By Devin Smith
The Greenville Advocate

Early into this high school football season the Georgiana Panthers seem to already be clicking on all cylinders following a 33-0 rout of the Houston Academy Rebels Friday evening.

It was a tale of two halves for the Panthers, who entered halftime with a 7-0 lead that had more missed opportunities than points.

It wasn’t until a punt was returned for a touchdown by junior receiver Jacquez Payton late in the first half that Georgiana sprang to life, and although the score was waved off due to a penalty the momentum had already begun to move in their favor.

Payton would get his touchdown a few plays later on an electric sideline-to-sideline cutback to give his team the first lead of the game.

He would finish the game with 201 total yards and a pair of touchdowns, the other coming on a 65-yard sprint down the right sideline for the first of 26 second-half points for the Panthers.

“Jacquez is an explosive guy on offense,” said head coach Ezell Powell. “He makes us go, when he’s on and he can make plays in the passing game it opens up everything else for us because you have to honor him.”

Payton was one of three players who were able find solid production in the running game against the Rebels, and along with fellow junior Quentarius Hawkins and senior Travales Smith combined for 311 yards on the ground.

This style of play is ideal for Powell, who preaches physicality and wearing down the opponent to his players.

“We’re trying to get these guys to understand that we’re going to be a physical football team,” said Powell. “When we play that type of football it leads us to these types of moments, so we just have to continue working to get better at it.”

Although Houston Academy brought it to the Panthers in the first half, their physicality allowed Georgiana to answer the bell and take control of the game on both sides of the ball.

Now sitting at 2-0 and outscoring opponents 73-3 Georgiana will prepare for a road trip to face the Florala Wildcats in the regional opener next Friday.