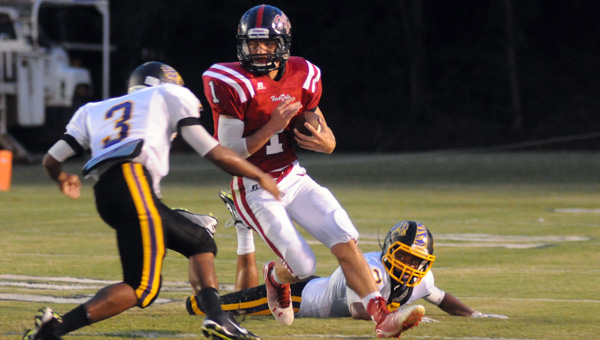 Change can be scary.

It can also be a good thing.

With the departure of several key players from last year’s offense, Fort Dale head coach James “Speed” Sampley made the decision in the spring to move from a pass-heavy spread attack to the run-oriented Wing T.

On Friday night it certainly looked like the right decision as the Eagles’ cruised to a 59-6 win over Evangel Christian Academy behind a dominant rush attack.

“It was a good first game,” Sampley said following the Eagles’ opener. “We played with more intensity. We still need to get better, but it was a good start.”

The Eagles (1-0) looked unstoppable in the early goings of the game. Fort Dale scored on its first three possessions of the game. Senior running back Ryan Burkett scored the first three touchdowns for the Eagles on runs of 9 yards, 5 yards and 21 yards. He finished with a team-best 65 yards on six carries.

“I felt like things went pretty well with the new offense,” Burkett said. “We’ve been working real hard and it’s taken some time to learn the plays — we’re still trying to get the hang of the plays — but we were able to move the ball tonight. Our line did a great job tonight.”

Burkett also added a 56-yard touchdown on a screen pass from junior quarterback Austin Vickery, who finished the game with 151 yards passing and two touchdowns. Vickery completed 4-of-7 attempts on the night.

Vickery’s second touchdown toss came on the Eagles’ next play after Burkett scored on the screen pass. That time it was senior Sawyer Kendrick who turned a screen pass into a 51-yard touchdown.

“We had been running the ball and I think those two passes caught them by surprise,” Burkett said. “That was a key play for us last year. We ran it tonight out of an old formation and it worked great. I think that’s always going to be a part of our offense.”

Junior Jake Gillem hit a 39-yard field goal and was 7-for-8 on point after attempts.

The Eagles will be back in action next Friday when they host Autauga Academy. Kickoff is set for 7 p.m.