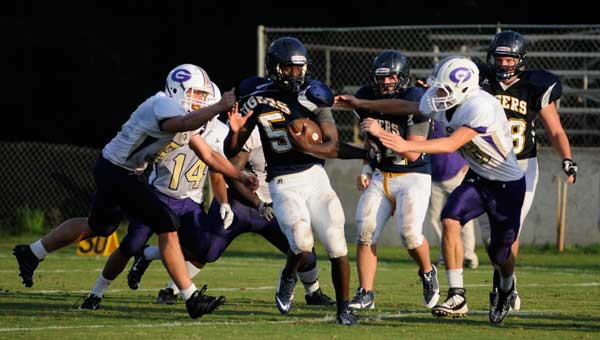 McKenzie’s Terrance Clemons shakes off a number of Goshen Eagles pursuers in the backfield. Clemons is one of several team leaders playing on both sides of the ball.

The Highland Home Flying Squadron have their targets locked on McKenzie following last year’s narrow 16-14 loss to the Tigers, but they do so with a  new commander at the helm.

Coach Claude Giddens, one of the most successful coaches in Highland Home’s history, returns to the Squadron with one singular goal—securing the first region win of the season.

McKenzie head football coach Josh McLendon said that though the athletes may be the star of the show, the true battle will be fought and won from the sidelines.

“He’s been very successful as a head coach; he was successful when he was at Highland Home before, so he brings a reputation with him of winning,” McLendon said.

“Any time you face a coach that has been successful, it always brings a level of having to be prepared for what he’s going to do.  We know Coach Giddens does a good job and he’s going to have those boys ready to play, so we’re looking forward to the challenge.”

Though the Tigers were able to take the win in last year’s contest on the road, McLendon and the crew are looking forward to enjoying home field advantage in this year’s game.

Though last Thursday’s abnormally high temperatures are likely as hot as conditions will likely get for the Tigers this season, being in better shape than their opponents will always be of the utmost concern.

“It’s always going to be a factor with us with the small numbers we have,” McLendon said.

“We feel like if we are in good enough shape to play those eight quarters like we talk about, then we’ll be fine.  We have a solid nucleus of about 18 players that are going to contribute, and we feel comfortable with any of those that we put out there.  I’m not going to make any excuses for numbers that we have or don’t have.  We’re just going to go play and enjoy being out there and enjoy these young men and go make it happen.”