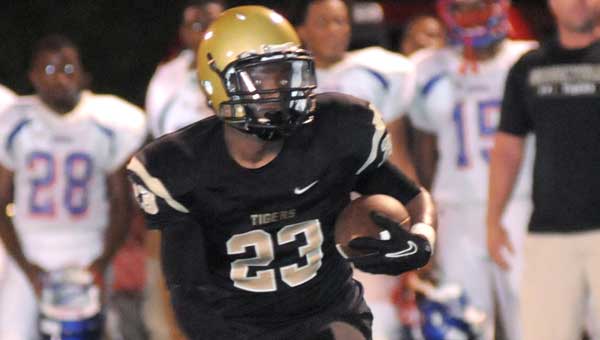 Zach Smith’s interception in Friday’s game with Wilcox Central was one item on a laundry list of impressive defensive efforts.

A new chapter of football is beginning over at Greenville High School, and the first page will be written Friday night when the Tigers face the Valley High School Rams.

“Any time you go out and play a game, it’s important to win because that’s the purpose of playing,” Plott said.

“I thought we went out and played well and took care of business early.  Any time you get a win, it boosts your confidence and gives you some momentum, and it lets you know what your strengths and weaknesses are.”

The primary weakness that stood out to Plott was his team’s ability to run the football, which he insists they’ll improve upon in the weeks ahead.

Fortunately, he found a strength in the passing game, with a handful of receivers who can make plays in the open space and a quarterback who can put it in the area for them to do just that.

But excelling at one or the other isn’t enough for Plott.

“We’re looking to kind of balance it out,” Plott added.

Another one of the team’s consistent strengths is its harrowing defense and the ability to fly to the football, and last Friday night was no exception.

“I was happy to see the defense play well, and they’ve continued that from the spring,” Plott said.

“Mal Caldwell and Parrish Patton are taking charge of the defense and are leading it for us, and those guys are doing a great job over there.”

But despite the impressive feats the Tigers have been able to accomplish in the air thus far, Plott insists that Friday night’s battle will be one that is won on the ground.

“They’re big up front.  Their front seven are big guys, and they play hard, so that’s going to be a challenge.  We’ve just got to continue to prepare for this week and get ready for that challenge.”