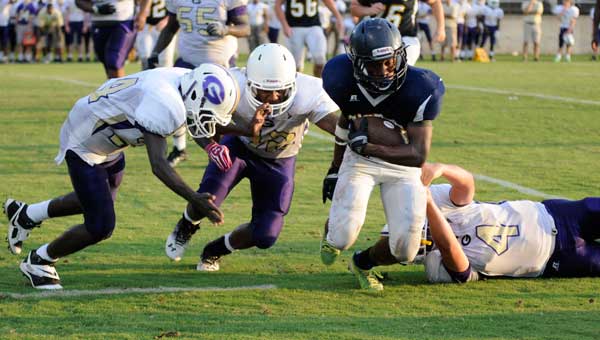 McKenzie runningback Chris Shufford shakes off a host of Goshen defenders to barrel down the sideline for the Tigers’ second score in Thursday’s 21-14 preseason win over the Eagles.

McKenzie head coach Josh McLendon’s mantra for the Tigers has been to “play for eight quarters,” but two proved enough Thursday night as the Tigers staved off the Goshen Eagles with a 21-14 win in Thursday night’s preseason jamboree.

But things looked bleak from the outset for the Tigers as the Eagles flew down the field unimpeded for their first score, eating up half of the first quarter in the process.

Goshen would have another shot at the end zone for a two-score lead following a McKenzie three-and-out, but a fumble recovered by Hunter Knight put McKenzie in prime position to answer the Eagles’ score.

The answer would come in the form of a strike to Condie Pugh, with his defender well behind him, on a go route for the Tigers’ first score.

The Tigers’ third attempt at finding paydirt was just as successful as the last, as Chris Shufford barreled down the sideline behind great downfield blocking for the second McKenzie score of the night.

With the Eagles offense struggling to find its rhythm, Pugh came down with another big catch—this time on the other side of the ball—for an interception that killed any chance of another Goshen score before the half.

Meanwhile, a bomb to William Brown took the Tigers out of their own territory and to Goshen’s own four-yard line, setting up Ty Adams for an easy walk-in and McKenzie’s 21st unanswered point.

Though McLendon was mostly pleased with his team’s first half performance, there were some bumps along the way.

“We were inconsistent; I didn’t like the fact that we had three positive plays and then three negative plays,” McLendon said.

“We would have good moments, good bursts where we execute and do what we have to do and then we would have a bad snap, or a penalty or a missed assignment—just stuff that we’ve got to clean up.  But that’s why we played tonight. Overall, I thought it was a good night, but we’ve got a long way to go.”

McLendon removed most of his starters for the third and final 10-minute quarter, which was an arrangement he and Goshen head coach Bart Snyder made prior to the game.

He added that he was proud of his players’ signature play-hard mentality, though he doesn’t think his team is conditioned well enough for a full game.

And though Thursday’s uncharacteristically hot temperatures were probably a factor,  he’d rather not leave it up to chance.

“We’ve got to turn it around and get right back to work for Highland Home, because Coach Giddens is going to have them well prepared and they’re going to be ready to go,” McLendon said.

The Tigers completed six of nine passes for 153 yards, and rushed for 69 yards.

Pugh and Brown each finished the night with an interception.

The Tigers face off with the Flying Squadron in the season opener at home Friday.