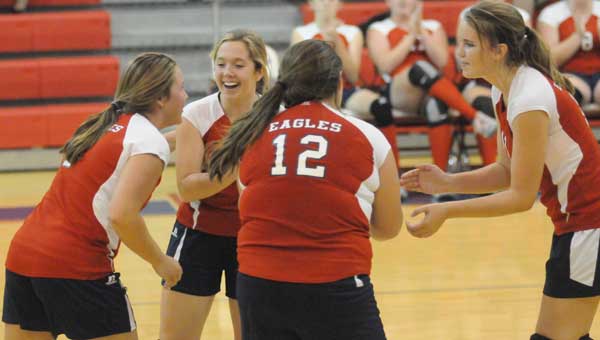 The Fort Dale Academy volleyball team has found early success on the court this season despite their small numbers. (Advocate staff/Andy Brown)

While it’s easy to get carried away with Friday night football fever in the fall, a handful of Fort Dale Academy volleyball players are heating up the court with some action of their own.

But this year, they do so with the lowest numbers they’ve had in recent memory.

Head FDA volleyball coach Scarlett Anderson was forced to combine her varsity and junior varsity squads for the fall, but none of that slowed down her preparation for the ensuing season.

Six juniors, one sophomore and three freshmen comprise the 10-girl volleyball squad, and though practice technically began well over a month ago, it hasn’t exactly been easy going.

“The worst part about it for us is that when you have 10 players and you have six on the court, we don’t even have enough to play each other,” Anderson said.

“It’s really not an accurate, game-like practice that we have because we’re down two.”

Anderson said that she is in the process of looking to outside sources for help, including male volunteers and even parents who are willing to help with practice.

And though there are a number of potential reasons for Anderson’s smallest volleyball roster in her 10-year history with the program, the most likely candidate is other extracurricular activities such as cheerleading, which can often prove too demanding to juggle during football season.

Despite the setbacks, Anderson is mostly pleased with her team’s performance in the first handful of matches this season.

Tuesday’s home game with Morgan Academy proved a little too much for the Eagles to handle, as they fell to the Senators three sets to one.

Anderson said that the biggest advantage Morgan held over Fort Dale was their extraordinary serving ability.

“We can stay with them, but they just placed their serves,” Anderson said.

“I told my team that 75 percent of our problem Tuesday was observation.  We weren’t observing our opponents like we should have.  We weren’t paying attention.  They can place the ball, and we are going to make sure that we’re prepared for that next time.”

Fort Dale will have plenty of opportunities to test their mettle next week with a busy schedule including Evangel Christian and Macon East at home Monday, Edgewood on the road Tuesday and a match at Hooper on Thursday.