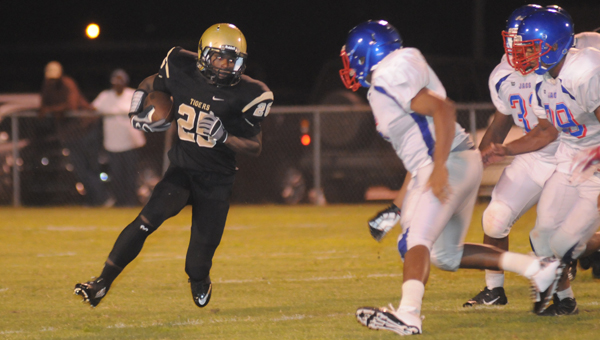 There wasn’t much to say following the Tigers’ 41-7 win.

“We played a good first half, but we got a little sloppy in the second half,” Plott said.

Greenville raced out to a 41-0 win before the Jaguars found the end zone on their first possession of the second half. By that time, Greenville had already pulled its starters.

Greenville’s first-year head coach said overall he was pleased with his team’s performance.

“I thought we played well in spots,” Plott said. “We’ve still got to get better in spots, but all the mistakes we made are correctable.”

Greenville scored its first touchdown of the contest midway through the first quarter when junior Skilar Moorer barreled his way into the end zone from 1 yard out.

He’d add a 21-yard scoring run in the second quarter.

“Skilar ran hard,” Plott said. “When the holes were there he was able to pick up positive yards.”

Starting quarterback Draylen McGrew threw for a pair of scores in the win. His first was a 15-yard strike to senior Myles Haynes. Later in the second quarter he tossed a 45-yard scoring pass to junior Shawn Thompson.

“Draylen played well,” Plott said. “We still need to work on his mechanics. When he stepped into his throws, he threw the ball well, but he threw off his back foot a lot. He did some good things tonight, but we’ve still got some work to do.”

On the defensive side of the ball, senior Zach Smith snagged an interception that led to Moorer’s second touchdown run.

Greenville will open its 2014 campaign next Friday when it travels to Valley. Kickoff is slated for 7 p.m.