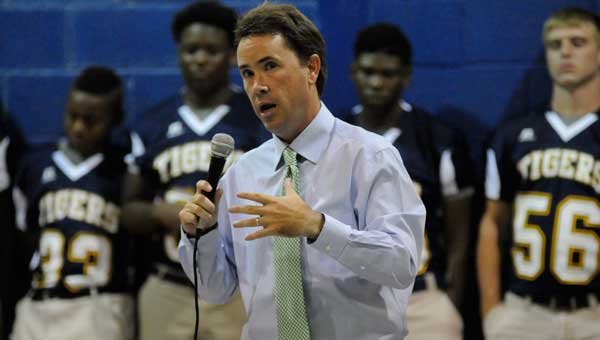 McKenzie head football coach Josh McLendon introduces the Tigers football team to a gym full of McKenzie fans, and also thanks them for their continued support.

There was no shortage of food or fellowship Monday night as the McKenzie Tigers football team and cheerleaders were formally introduced to the town’s residents.

After a potluck dinner provided by various members of the community, McKenzie head football coach Josh McLendon took to the stage to introduce the 23 players comprising the 2014 Tigers team.

McLendon thanked McKenzie residents for their continued support, and added that it would be vital for the team’s success in the fall.

But it hasn’t been all sunshine and rainbows for the Tigers this summer, and McLendon recounted one particularly rough day of practice last week that proved to be a pivotal turning point in the Tigers’ growth as a unit.

“It was the first day of school, so I understand they were tired,” McLendon said.

“But they came out and they were just going through the motions. God only gives us so much time here on Earth and we don’t want to waste our time, especially not at practice where we try to get better.”

The following day of practice had the potential to be even worse, with a number of football players missing and others left unsure whether they would play in the fall.

Only 15 players showed up to practice that day, and McLendon was at his wit’s end.

“I was at a loss, I was struggling, I was focusing on the wrong thing and my attitude was not where it was supposed to be,” McLendon added.

“I look over at these guys and they couldn’t be happier—more fired up to be out there.  The numbers we had was the furthest thing from their minds.  They just wanted to be out there on that football field playing and having a good time.  So while us coaches were over there struggling, these guys taught me something. They taught me that, for one, your attitude needs to be better. The second thing, and the most important lesson, was that God is in control of everything.”

The trial has transformed the Tigers team into a family, and McLendon remarked that small numbers can sometimes be advantageous—after all, the close-knit nature of the McKenzie community is one of its best features.

“I don’t care if you’ve got 50 or 23 young men like we have tonight—if you’re pulling on the same chain and everybody’s pulling in the same direction, then you’re going to be successful.”