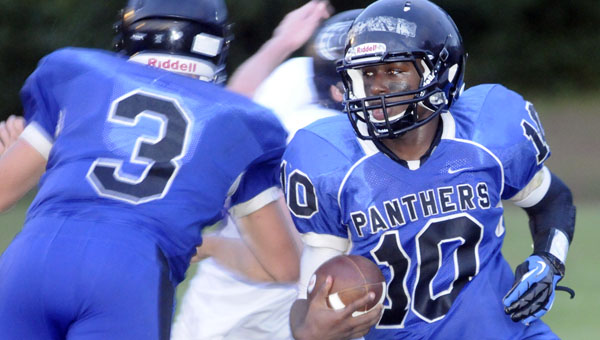 When Harmon Field’s stadium lights flickered out in last August’s preseason game with Prattville Christian, so too went the Georgiana Panthers’ shot at a complete victory.

The Panthers went into the locker room at halftime up by a pair of touchdowns, never to return to the field.

But with this season’s opener against Prattville Christian, Georgiana head coach Ezell Powell isn’t out to prove a point Friday night.

He just wants a win.

“I’ve got an older group of kids, and we’re just ready to get out and play and try to get this season started and see what all of the work they’ve put in during the offseason is going to result in.”

Though the Panthers have grown in many respects since last August, Powell is unsure exactly what to expect from Prattville Christian.

Powell’s challenge to his players this week has been to prepare for anything and everything.

“We know they’re going to be in some kind of spread like last year, but we don’t know exactly what,” Powell added.

Unlike last year, the stakes are a bit higher as this season’s face-off marks the first regular season game for both teams.

The move pushes the Panthers up on the calendar in the area, as other schools begin on the following Friday.  Having a week taken away and having an earlier start could be a detriment, but Powell doesn’t see it that way.

“I think in the long run, it’ll help because it starts to get us mentally prepared for the season earlier,” Powell said.

“Sometimes, kids have a tendency to still be a little lax in a jamboree game when they know it doesn’t mean anything.  This forces us to get a little bit more focused now versus later and that gives us an edge and allows us to play a little bit better at a faster rate.”

Though Prattville Christian’s strategy is shrouded in secrecy, Powell can control how the Panthers respond.

“The offensive line has to come off the football, be physical and block; it’s the same thing with receivers,” Powell said.

“Running backs have to run the football hard and not turn it over.  Defensively, we’ve just got to trust our keys, run to the football and tackle well on defense.  If we can do those things, then I think we have a chance to win the ball game.”