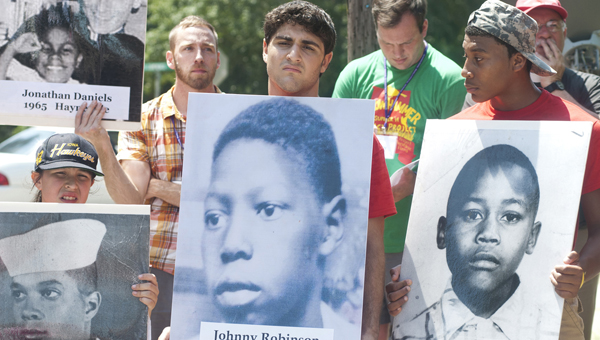 During the procession from the Lowndes County Courthouse to the jail where Jonathan Myrick Daniels was kept for six days and then on to the former Varner’s Cash Store where he was fatally shot, youth carried posters of Civil Rights martyrs from Alabama. (BNI Staff/Justin Averette)

Pilgrims from across the country gathered Saturday in the town of Hayneville to honor Alabama Civil Rights martyr Jonathan Myrick Daniels.

They assembled on the Lowndes County Courthouse Square, where 49 years ago this week Daniels, an Episcopal seminarian, was shot and killed for no reason other than encouraging his brothers and sisters and supporting their struggle for equality.

The pilgrims come from all walks of life — men, women and children, black and white, toddlers to great-grandparents, locals and travelers far from home — but have one thing in common.

They come to recognize, remember and reflect on Daniels’ sacrifice and that of others who died during the Civil Rights Movement.

So they gather under the shadow of the courthouse, seeking shelter and shade from the scorching sun under stately oaks, themselves silent witnesses to what transpired here in the summer of 1965.

The square and the heat, oppressive and constant, are practically unchanged from that faithful Friday that Daniels died, according to former Catholic priest Richard F. Morrisroe, who was shot alongside the martyr.

“It’s still as hot and humid, you don’t forget that,” said Morrisroe, who came down from his home in Indiana for this weekend’s pilgrimage.

In March 1965, Daniels, a 26-year-old from New Hampshire, answered the call from Dr. Martin Luther King Jr. for students and clergy to come to Selma to take part in the voting rights march to Montgomery.

After returning to seminary for final exams, Daniels came back to Alabama in July, where he worked to register voters, tutor students and help the poor. He also meet Morrisroe though politician and Civil Rights leader John Lewis.

On Aug. 20, 1965, Daniels and Morrisroe as well as 20 other protesters had just been released from a six-day stay in the deplorable Lowndes County Jail after picketing a whites-only store in Fort Deposit.

Daniels and Morrisroe walked with two black teenage girls to nearby Varner’s Cash Store, one of the few places that would serve nonwhites, to buy cold drinks for the group.

The four were met at the store’s entrance by shotgun wielding volunteer sheriff’s deputy Tom L. Coleman. He threatened the group and pointed his shotgun at 16-year-old Ruby Sales.

Daniels pushed Ruby to the ground, taking a full shotgun blast to the chest and stomach. Morrisroe grabbed the other girl, Joyce Bailey, and ran, but he too was gunned down in the lower back.

Morrisroe survived after an 11-hour surgery in Montgomery; Daniels died instantly on the store’s front stoop.

“I lived and Jonathan died,” Morrisroe explained to a group of students Saturday morning.

Morrisroe decided to leave the priesthood six to eight years after what happened in Hayneville.

He went into law and city planning and married wife, Sylvia, and they have two children, Jonathan and Siobhan, and several grandchildren.

Morrisroe said the events of 1965 seem like a lifetime ago.

“I’m probably more philosophical about what happened now than I have ever been in my life,” he said.

Still he said it warms his heart to see people honor Daniels, and he hopes the pilgrimage grows and becomes even more ecumenical.

“I think it’s beautiful to see young people exploring this,” he said.

Saturday began with pilgrims gathering outside the courthouse. From there, they walked the few blocks to the old Lowndes County Jail and what used to be Varner’s Cash Store.

Along the way, they sang Spirituals and carried signs depicting Civil Rights martyrs. At both stops, excerpts from a Daniels’ biography “Outside Agitator” and Scripture were read and prayers give.

Outside the store, many pilgrims, some in tears, took a moment to reflect and kneel at the spot where Daniels’ blood was shed.

It was one of the most emotional moments of the day, underscored by the Rev. Fannie Davis, a Lowndes County resident, song, “How soon we will be done … With the trouble of the world … I am going home to live with God.”

The group then walked back to the courthouse square where they stopped at a monument erected by Virginia Military Institute, where Daniels graduated valedictorian in 1961.

From there, the pilgrims went to the courthouse, inside the very room were Coleman was tried for Daniels’ death and acquitted. There they heard a homily from the Rt. Rev. Robert C. Wright, bishop of the Diocese of Atlanta.

Wright was born in a Pittsburg, Pa. orphanage but was adopted at nine months old. He would go on to serve in the Navy and led St. Paul’s Atlanta, the largest predominately African American Episcopal church in the country. He was ordained the first black bishop in Georgia history in October 2012.

Wright challenged pilgrims to remember Daniels and other martyrs by trying to make a difference.

“Jonathan Daniels’ behavior is consistent with belief in Jesus Christ. Start acting on behalf of those suffering from the woes of this world,” Wright said. “What will you be prepared to do next?”

Christians should be ready to be sent into harm’s way for the church’s sake, he said.

“People want a magic answer from church. The only answer from the Gospel is you got to believe, to walk, to die, to struggle on from something,” Wright said. “God working through this feeble frame — that makes the difference.”

He ended his remarks with a challenge: “If you want to honor the martyrs of Alabama — Do something.”

After Wright’s homily, all 16 Alabama Civil Rights martyrs were recognized from Elmore Bolling in 1947 to Samuel Leamon Younge Jr. in 1966.

Johnny Robinson was added this year — the 16-year-old Birmingham boy was shot and killed by a police officer after two groups of youth, one black and one white, exchanged taunts, rocks and bottles following unrest after the Sixteenth Street Baptist Church bombing.

Assistant Bishop of Alabama Santosh Marray reported that conversations about the future of the former Varner’s Cash Store are moving in a positive direction. He said he hopes the diocese and local leaders can share plans for future preservation at the 50th anniversary of Daniels’ martyrdom in 2015.

“We should not underestimate the power and impact of this commemoration,” Marray said. “The Jonathan Daniels’ pilgrimage isn’t going away. If anything, it will just get more popular.”

Daniels was added to the Episcopal Church Calendar of Saints and Martyrs in 1994 to be remembered each Aug. 14.