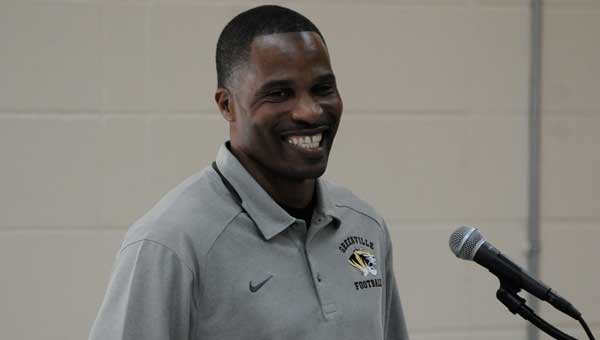 All eyes were on the county’s four football coaches Tuesday at the Greenville Kiwanis Club’s annual Coaches Corner event.
McKenzie School’s Josh McLendon and Georgiana School’s Ezell Powell returned as second-year coaches to join longtime Fort Dale Academy head coach James “Speed” Sampley at the microphone to outline their school’s respective outlooks for the fall season.
The only new face among the bunch belonged to first-year Greenville head coach Patrick Plott, who comes to the Camellia City fresh off of a perfect season with his previous school, the 2013 state champion Pickens County High School Tornados.
Plott said that he’s been impressed with his players’ work ethic in the spring and summer, and he’s looking forward to seeing the fruits of their labor on both sides of the ball.
“We’re going with a  spread offense, mostly four wide, and we’re going to run the ball, but we’ve got two guys outside on each side that are 6’3’’ with good hands, so we’re going to take advantage of that,” Plott said.
“Defensively, we’re a 3-4 team.  Our guys play fast and fly to the football, and that’s been a positive for us all summer.”
McLendon said that he’s optimistic about this season, regardless of his team’s small numbers.
“We’re 25 strong.  That’s a little lower than in the past, but I’ve always been told that you can’t put but 11 on the field, so we’re going to put those 11 on the field and roll with it,” McLendon said.
“I’m confident in what they can do, but we’ve got a tall task in front of us.  We’ve got some good teams like Georgiana and Brantley in our region that are going to be strong competitors this year.”
Powell said that his primary goal this season is to get Georgiana’s swagger back with a singular, smash-mouth approach on offense and defense.
“We’re going to try to be a run-first, throw-second type of football team,” Powell said.
“We’ve been out here in practice now for six days, and yesterday was the first day we threw a pass.
“We’re going to be a physical football team.  We have enough athletes that we could spread it out and throw it all over the place, but I honestly believe that when you face a team that can hit you right in the mouth, they’re going to beat you every time.  The teams that consistently win championships play smash mouth football.”
Sampley said that this year is bringing more change than most, with a shift to the new double wing flex bone, modeled after Georgia Tech’s offense.
“We did that because we have more running backs this year than we’ve had in a while and we feel like it’s going to help us be more physical,” Sampley said.
“It’s harder to call, but it’s a good change for us.  I don’t know how well we’ll run it right now.  But I hope by the time we get to playing the people in our region, we’ll be running it pretty good.”
Fort Dale will travel to Macon East for a scrimmage on Aug. 15.
McKenzie and Greenville will host Goshen and Wilcox Central respectively on Aug. 21.
And Georgiana will hit the road to face Prattville Christian, last year’s preseason opponent, for the first regular season game of 2014 on Aug. 22.