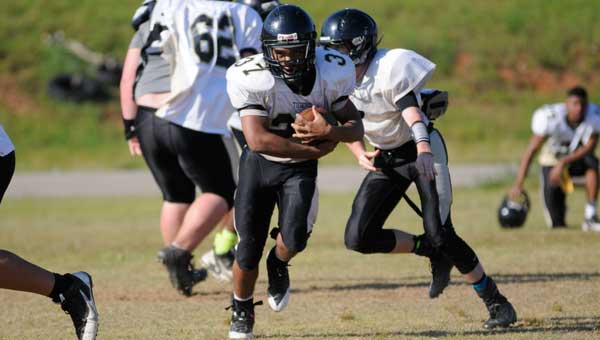 Things have been relatively quiet over at Greenville High School as far as football is concerned, but one would be remiss to confuse that silence with idleness.

The Tigers have shifted priorities a bit; before traveling and playing in 7-on-7 tournaments around the state, Greenville head football coach Patrick Plott opted instead to take care of things at home.

But the Tigers did travel to two 7-on-7 camps—one at the University of Alabama at Birmingham and the other at Troy University—though Plott’s focus was less on winning and more on sharpening the team’s competitive spirit to a razor edge.

“We went to those two just to see how well our kids would compete,” Plott said.

“We didn’t go to win or lose.  You always want to win, but that wasn’t the main focus. The main focus was to compete.”

It’s only been a few months since Plott arrived to Greenville from Pickens County, and the hurried spring training season made the transition even less smooth at the time.

In that regard, summer has benefited him just as much as his players.

“Everything is slowing down now that I’m here and I’ve got my feet on the ground,” Plott added.

Everything is starting to come together, and I’m comfortable with these guys now.”

Despite the progress, there are still a number of decisions to be made before the fall season rolls around.

One of the spring’s biggest questions has been answered, however, as Draylen McGrew is firmly rooted at the helm of the Tigers offense at the starting quarterback position.

Yet there remain more questions than answers on both offense and defense as Plott uses the remaining weeks to solidify the starting roster.

Since the spring, Plott has seen his kids grow in a number of ways, from their progress in the weight room to their talent on the field.

But the thing that impressed him the most was perhaps always there.  And it’s something that you can’t coach.

“These kids here have a tremendous work ethic,” Plott said.

“They’re going to work hard regardless of what we’re doing, and they’re always going to give it 100 percent.”

The Tigers have been scrimmaging among themselves for the vast majority of the summer, but they’ll face their first outside competition in quite some time in the form of Wilcox Central in a preseason game scheduled for Aug. 21 at Tiger Stadium.

Kickoff is slated for 7 p.m.