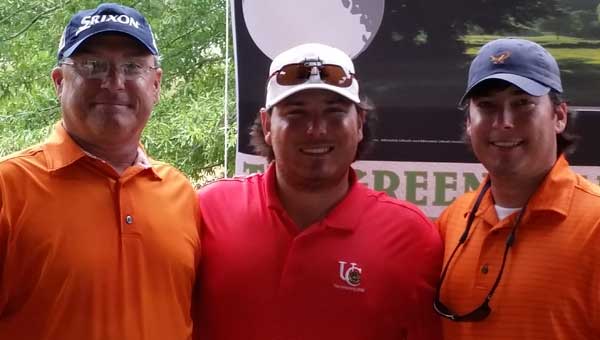 The team of Steve Norman, Paul Norman and Ben Norman finished in first place in this year’s Jaycees Kids Classic golf tournament, which raised $4,000. The money raised will be used to buy Christmas presents for area foster children.

The team of Steve Norman, Paul Norman and Ben Norman continued their tradition of excellence by taking first at this year’s Jaycees Kids Classic golf tournament.

More importantly, the Greenville Jaycees continued the tradition of making Christmas a little merrier for a handful of Butler County’s foster children.

This year’s tournament raised $4,000 for the purposes of providing the county’s foster children with Christmas gifts.

Ben Norman, who served as this year’s tournament organizer, said that the weekend was a successful one, and not just because his team placed first.

“Dad and I have won several years in a row—Paul’s played with us twice and Cody played with us last year, and we’ve had a pretty good streak going,” Norman said.

“But I think it went well.  We had a decent turnout and the weather was good.  We had shrimp, sausage, potatoes and corn, provided by Ala. Land Co., and the turnout was pretty close to last year’s.”

Though this year’s participants are similar in number to those of 2013, participation is still on a downward trend in recent years.

Norman attributes that to a number of factors, including a few that can’t be helped.

“I think it was probably because it’s so close to school starting,” Norman added.

“People are doing vacationing and that kind of stuff.  We may try to move it up next year.”