McClain hoping to hit the right notes in DYW contest

For some people, college is a last minute choice.

That’s not the case for Tamara McClain. She knows exactly where she wants to go, and has for quite some time.

“I have been going to Alabama State University Connection Day since the eighth grade,” said McClain.

She said that as a young girl, she felt called to attend ASU after seeing the school’s band perform in one of Montgomery’s Christmas parades.

Since then McClain has joined the Greenville High School band and plays the clarinet. She has played the clarinet since fifth grade and began marching in the band since eighth grade, making her one of the youngest to march at that time.

McClain is now the field captain and says that she wouldn’t change a thing.

“Music has been my life ever since I sang in the choir as a little girl,” she said. 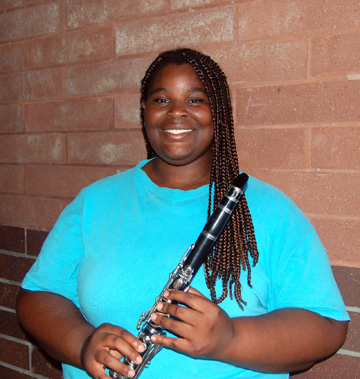 Tamara McCalin has played the clarinet since fifth grade and began marching in the Greenville High School band in the eighth grade, making her one of the youngest to march at that time. McClain is one of eight seniors from across the county competing for the title of Butler County’s Distinguished Young Woman. (Advocate Staff/Morgan Burkett)

McClain hopes that her talent in music is more than enough to get her a scholarship for college so that she may pursue her dream to double major in music and theater.

After visiting ASU for her first campus tour last year, she has known that this college is the one for her.

“Since ASU’s College of Visual and Performing Arts’ theatre department was named as the nation’s best fine arts program at the annual Historically Black Colleges and Universities awards ceremony, I feel that this college is my best hope to attain my degree,” said McClain.

McClain also hopes to steal the show with her musical abilities in this year’s Distinguished Young Women competition.

McClain is one of eight seniors from across the county competing for the title of Butler County’s Distinguished Young Woman.