Tigers, Panthers square off in final 7-on-7 of summer 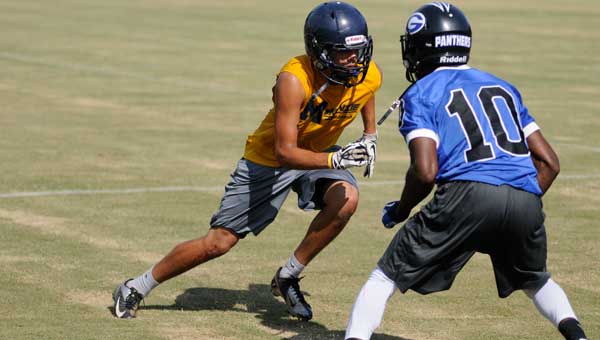 McKenzie receiver Condie Pugh and Georgiana defensive back Jacquez Payton made for one of Thursday’s most interesting matchups.

Thursday’s cool temperatures was an oasis in an otherwise arid desert of July weather for a 7-on-7 tournament between the Georgiana Panthers, the McKenzie Tigers and the Hillcrest Evergreen Jaguars.

But for three hours, the action on the field was more than hot enough to compensate.

“It was a good day of competition,” said McKenzie head coach Josh McLendon about his team’s 3-1 performance on the day.

“We got out of it what we wanted to get out of it, we got to compete and got to get out there and run around a little bit and have a good time, so it was a good day, I thought.”

Slow and steady progress has been the name of the game for the Tigers this summer, though McLendon added that his team’s relatively small roster is a small concern.

“Our numbers are a little lower than what I want them, but I’m happy with who we have out there,” McLendon added.

“And we were talking as coaches last night and we fell like we’ve seen some kids really progress and get better just in the short amount of time we’ve been out there.  So I’m hoping that we can continue to work, lift, run, get in shape and do all of those things that we’ve got to do to be ready when the season starts.”

As for the Panthers, who split their contests 2-2 Thursday afternoon, Georgiana head coach Ezell Powell saw a number of noteworthy improvements, particularly on defense.

“I thought we played a little bit better in the secondary on our coverages, so I was pleased with that,” Powell said.

“Right now, we’re going to go with Allen Smith as our quarterback right now, and Jacquez Payton also. We beat Hillcrest twice and lost to McKenzie both times by less than a touchdown.  But I was pleased with the effort.  We moved the ball down the field on both of them.  It’s just that when we got in the red zone—especially against McKenzie—we couldn’t get the ball into the end zone. The quarterback made some improper reads, but it’s not anything that we can’t get better at.”