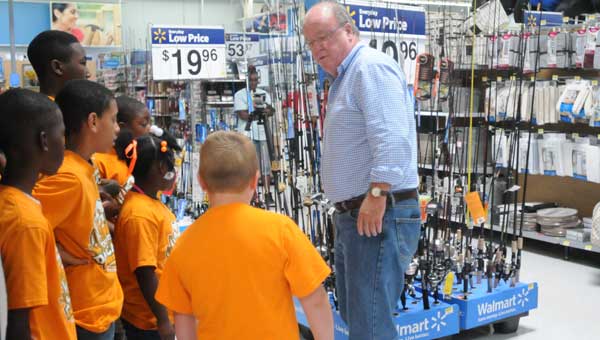 Once upon a time, the art of fishing came as naturally as breathing here in the South.

But somewhere between the Internet, video games and television, it became an art that was very much lost on the younger generation.

But a handful of community leaders have set out to correct that with a youth fishing expedition slated for Wednesday from 9 a.m. until noon at American Legion Pond.

The City of Greenville and the Alabama Black Belt Adventures Association are teaming up to put an educational twist on a fun fishing event for children in Greenville’s summer youth day camp.

Not only will roughly 100 children have the opportunity to fish, but they’ll do so with some brand new fishing gear courtesy of the Greenville Walmart Supercenter.

Walmart also donated $1,000 to help cover the cost of the entire event.

Deirdre Womack said that the event’s creation is thanks to the Greenville community at large.

“It’s just been wonderful—things have just been falling into place, and people have been so eager to help our children,” Womack said.

“Every child should know how to fish and have that opportunity. And so many times, our young people express the desire to fish but no one ever takes the time to take them to fish or teach them the proper techniques.”

The children will break up into groups of 20-30 and rotate among five stations.

Fishing is a station unto itself, as well as a station that focuses on teaching participants the importance of water conservation.

Another station, called Teams Making an Impact (TMI), will focus on citizenship and leadership skills.  A fourth station, called Health Rocks, will teach the importance of making good decisions.

A fifth and final station will allow campers to make their own ice cream using a bag in a matter of minutes.

Anthony Pinkston, county extension coordinator with the Butler County Extension Office, said that it was important to make the experience about education as well as fun.

“That’s what Extension does; it’s about education, and even though we do a lot of programs on natural resources and things of that nature, we also want to give them something that they can use throughout their lives also,” Pinkston said.

“I saw it as a great opportunity for young people to have fun and learn something at the same time, so I was very happy to assist them in putting this program together for the young people.”

Womack added that, when all is said and done, getting several of the county’s children outdoors for an extended period of time is a small victory in and of itself.

“With us being in the age of technology and videogames, our youth spend a lot of time indoors,” Womack said.

“And we want them to appreciate nature as well, and to know that there are activities and games that you can do outside and have just as much fun.”