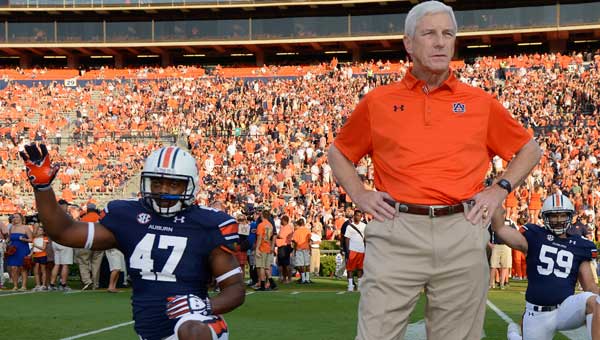 Ellis Johnson has been around the game of football for four decades.

Nearly 20 of those years have been spent in the Southeastern Conference.

But the Auburn University defensive coordinator has never been a part of a season like the Tigers’ 2013 campaign — his first on the Plains.

After posting a 3-9 record and failing to win a single conference game in 2012, Auburn orchestrated the second biggest turnaround in college football history in 2013. Seemingly from out of nowhere, the Tigers reeled off a 12-2 season, including a 7-1 mark in conference play, and finished as the SEC champions and runner-up to national champion Florida State University.

“In all my years of coaching I’ve never been through a season like that — just the way things were set up,” Johnson told the Butler County Auburn Club at its meeting Thursday night at Cambrian Ridge. “Auburn had a bad year the season before. No one was expecting much. We had our two biggest rivals coming in to play in Georgia and Alabama. We played against five kids that at some point were mentioned as favorites for the Heisman Trophy. I can’t ever remember going through a season like that. The way we won those games in Jordan-Hare was really a storybook season.”

While Johnson enjoyed the ride in 2013, his attention is now squarely focused on 2014.

“We’re not the defending SEC champions,” he said. “We’ll have some guys back that played on that team, but this is a different team. They haven’t proven or own anything yet.”

Johnson said if the Tigers hope to repeat their success from 2013, they’ll have to do some with a different mindset.

“2014 forms up to be a lot more challenging without the added pressure of being defending SEC champions. A year ago, there were no expectations,” he said. “No one thought we’d be very good. This year, if we want to get the big prize, we’ll have to do it by winning one game at a time. We can’t have a rollercoaster ride season. We have to prepare each week and keep the focus on the next game.”

Johnson expects the Tigers to be challenged beginning in Week 1 by SEC rival Arkansas.

After a showdown with San Jose State, the Tigers will travel to Kansas State.

“That’s a real trap game,” he said. “That’s a tough road game against what I believe will be a good  team.”

The Tigers also have to travel to face Georgia and Alabama in 2014. Despite the challenges, Johnson is optimistic.

He believes the Tigers will have an improved passing game now that quarterback Nick Marshall has a season under his belt.

“I think we could have thrown more last year than we did, but we just didn’t have to with the running game we had,” he said.

Johnson also expects his defense to be improved.

“Those guys had played three different systems three years in a row,” he said. “That’s where a lot of our mistakes came from. Now they have a year in our system and should be a lot better. I feel like we’ll be better.”