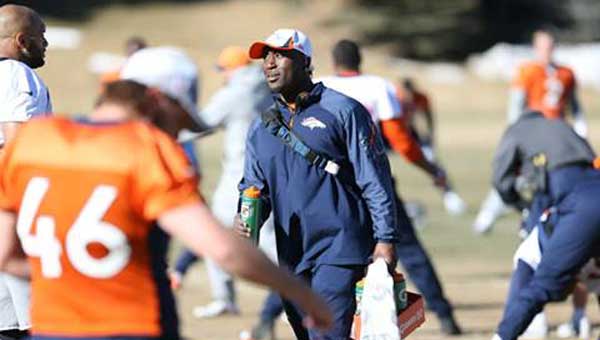 During his time spent with the Broncos, Peagler said that the relationship he built with players resembled a family bond.

One Greenville native recently got to expand his horizons from one of the most interesting perspectives imaginable—the Denver Broncos sidelines.

Patrick Peagler graduated with a degree in athletic training from Troy University and received an internship with the Broncos for an entire season as a certified athletic trainer intern.

“So basically we do a lot of rehab and when someone gets hurt on the field, we’re the people that run out there to tend to them immediately as soon as they go down.”

While Peagler saw and tended to a number of injuries, the visit Denver also afforded him the opportunity to take in a number of other sights.

The Denver scenery, for one, is an image that Peagler will sorely miss and was just one of the reasons that made the return home so difficult.

But he was also able to meet a number of celebrities on a daily basis, including professional athletes like Ray Lewis and Randy Moss, ESPN analyst Chris “Boomer” Berman, Archie Manning, John Elway and even Tiger Woods and his Olympic gold medalist girlfriend, Lindsey Vonn.

But even more than the opportunity to meet A-list celebrities, it was the chance to broaden his worldview that Peagler was most thankful for.

“It really opens your eyes and lets you know that there’s more out there than what you see in Greenville, Alabama or the South,” Peagler said.

“Whether it be little things like restaurants or anything else, there’s stuff in Colorado and these different places we traveled to that you just don’t see in the South.”

But it wasn’t all work and no play for Peagler, as spending more than half a year with the Broncos also meant forming bonds with each of the players on the team.

Once the celebrity veil lifted, it wasn’t long before the players went from being celebrities to normal people, and then from normal people to extended family.

“The players really treat you like family, because the athletic trainer is usually the person behind the shadows, and when players are going through stuff, they don’t like to go to other players to vent and talk.  Most of the time, they come to athletic trainers.

“I’ve seen this on all levels.  When they’re at the facility, they’re in the athletic trainer room, constantly talking to us, making jokes and playing around.  So we gained a great bond.”

Peagler added that his proximity to the Broncos also allowed him to see how influential the media are in the lives of fans and players, and nowhere was that influence more apparent than Super Bowl XLVIII.

Though weeklong experience with the team in New York was a mind-blowing one for a number of reasons, he could also see the spectacle taking a toll on the team.

“It was very stressful—the media get so involved in the Super Bowl, and players have to be in so many meetings and do so many interviews,” Peagler said.

“They just get tired of the whole process.  I could tell by the players’ expressions and their body language that they were exhausted.”

That, coupled with the rolling momentum of the Seahawks fans in the stadium, was a recipe for disaster.

“You can tell the difference between the Super Bowl and even a regular playoffs game,” Peagler added.

“I felt like it was more Broncos fans than Seahawks fans, but after that first play when the snap went over Peyton’s head, it was like you could sense that there were more Seahawks fans in the building.”

Though his internship is complete, he still communicates with several players on a daily basis.

Moreover, he formed some even more important relationships with several athletic trainers from opposing teams.

Pre-game meetings with other trainers were the perfect chance to network for potential jobs in the future.

“I’m about to go to Mercer University to get my master’s, and once I complete my master’s, I’m looking to go back to the NFL for a permanent job,” Peagler said.

But regardless of the outcome, Peagler is a Broncos fan through and through, both of the organization and of every individual person he came across in the 2013 season.

“They released a couple of players and a couple of others got traded, but I still have the personal cell phone numbers of some of the guys who got cut,” Peagler said.

“It’s one of those things where you can’t break that bond, whether they’re on the same team or not.  But I’m always going to be rooting for the Broncos.”