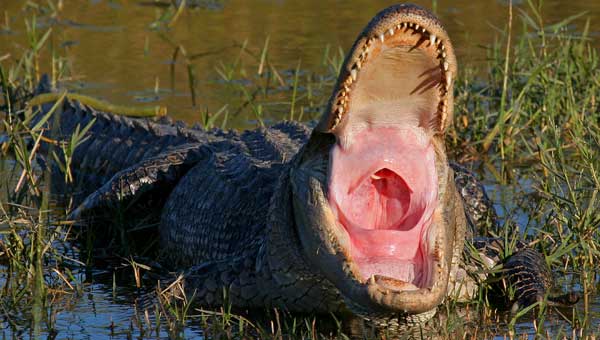 The opening of gator hunt registration in June brings with it a number of changes for 2014’s registration process.

The Alabama Department of Conservation and Natural Resources (ADCNR) will open registration for the state’s ninth regulated alligator hunts on June 3.

Several changes have been made to the hunt rules including a limit of one registration per person, per zone.

Registration must be completed online at outdooralabama.com between June 3 at 8 a.m. and July 8 at 8 a.m.

A total of 240 alligator possession tags will be issued for the hunts, which will be held Aug. 14-17 and Aug. 21-24 in southwest and west central Alabama, and Aug. 8-24 in southeast Alabama.

The administrative fee to apply for an alligator possession tag is $22 and individuals may only register one time per zone.

Only Alabama residents and Alabama lifetime license holders ages 16 years or older may apply for tags.

Alabama lifetime license holders may apply for an alligator possession tag even if they have moved out of the state.

While the cost of the tag is free, selected hunters and their assistants are required to have a valid hunting license in their possession.

Applicants will be able to check their status at outdooralabama.com after the drawing takes place July 8.

Those selected to receive a tag must complete an online acceptance by 8 a.m. on July 15.

After that date, alternates will be notified to fill any vacancies.

Several changes have been implemented for the 2014 alligator hunts. First, the number of tags for the hunts in southeast Alabama was reduced to 40 and a minimum length of 8 feet was instituted to protect females in the reproductive class.

Auburn University researchers and Wildlife and Freshwater Fisheries staff have been concerned about recruitment of hatchlings into the population outside of the Eufaula National Wildlife Refuge.

The 8-foot minimum length should increase reproductive capacity and recruitment into the population.

Second, a preference points system is being implemented to increase the odds of being drawn for the hunt as long as individuals continue to register annually.

Preference points will be awarded to individuals who are not selected this year but do register for the 2015 hunts.

Third, registration costs were increased to $22 ($20 administrative fee plus a $2 transaction fee per person, per zone) to allow ADCNR to obtain the administrative costs for alligator hunt related expenditures.

Individuals will only be allowed to register once per zone instead of multiple times as in years past.

Each person receiving an alligator possession tag will be allowed to harvest one alligator.

Hunting hours are 8 p.m. to 6 a.m. in all locations. All Alabama hunting and boating regulations must be followed.

The American alligator (Alligator mississippiensis) is the largest reptile in North America.

A fully mature alligator may grow to 14 feet in length and weigh as much as 1,000 pounds.

Known for its prized meat and leather, the species was threatened with extinction due to unregulated harvest during the 1920s, 30s and 40s.

No regulations existed in those days to limit the number of alligators harvested.

In 1938, it is believed that Alabama was the first state to protect alligators by outlawing these harvests.

Other states soon followed and in 1967, the U.S. Fish and Wildlife Service placed the American alligator on the Endangered Species list.

By 1987, the species was removed from the Endangered Species list and the alligator population has continued to grow.