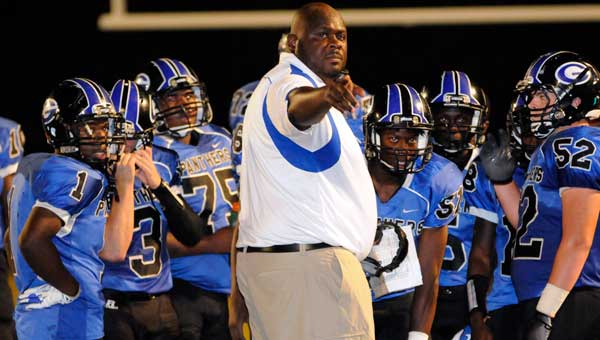 Head coach Ezell Powell enters his second year with the Panthers after losing only three seniors from 2013.

Georgiana’s spring football exhibition was an encounter of the unknown and the familiar as the Panthers faced the Hillcrest Jaguars and the Pleasant Home Eagles Friday night.

The Panthers lost 24-6 in their first contest with Hillcrest, but regained their composure to defeat Pleasant Home 22-0, and second-year Georgiana head football coach Ezell Powell said that he was pleased with the overall progress that his players have made from one year to the next.

“The guys understood where they should go and who they should be blocking, and we executed our run game and pass game fairly decently,” Powell said.

“We did a good job on staying on blocks, being physical up front and running the ball a little bit, so those were some positives coming out of the spring that we’re going to look to build off of.”

On the other hand, reviewing Friday’s tape showed some glaring weaknesses, particularly in the Panther defense. A handful of blown assignments in the secondary, fighting to get off blocks and general tackling will be a focus heading into the summer.

“We were there a lot of the time, but we didn’t get off of blocks as fast as we needed to,” Powell added.

“There were times when we got where we were supposed to be, but we didn’t make the tackle and bring the guy to the ground.”

Most of the Panthers’ struggles came against Hillcrest, whose fast and physical nature stood out to Powell as a good measuring stick for his team’s progress.

Their staunch defense held the Panthers out of the end zone on all but one attempt, but Powell said that his team responded to the challenge in kind with physical play of their own.

“It was good for our confidence and let our kids know that they can get out there and play with anybody, as long as they play hard and work together,” Powell said.

“As you get ready to get into the playoffs, you’re going to face teams like Hillcrest that are going to be very fast, athletic and physical, and that was one of those tests that we needed to take to give our kids a chance to see that they can play, compete and win against teams of that caliber.”

But even though spring training has reached an end, preparation for the fall is just beginning as summer workouts begin on June 3, complete with 8:30 a.m. workouts on Tuesday, Wednesday and Thursday.