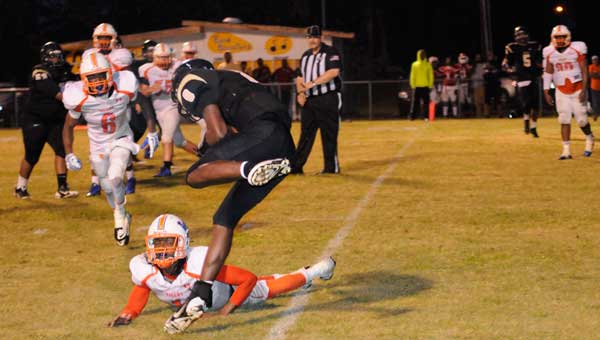 Winston Sims connected with Ra’heem Moore to give the Tigers a momentary lead against Valley with only seconds left in the game.

It was a dark and stormy Friday night at Tiger Stadium in more ways than one as the Greenville Tigers dropped a pair of heartbreaking jamboree games to Valley and Robert E. Lee High School.

A slippery start for the Tigers offense resulted in a handful of fumbles early on, two of which resulted in turnovers.

Fortunately, the Tigers defense was firing on all cylinders for the majority of the night, led by Parrish Patton, who secured a number of crucial stops behind the line of scrimmage to give the offense a second chance.

“We’re very sound on defense, and other than a few mistakes, I thought we played well defensively,” said Greenville head coach Patrick Plott.

“We didn’t play badly offensively, but we’ve got to get better up front on the offensive line.  And we’ve got to do a better job of holding on to the ball as running backs. The ball was pretty wet, but at the same time, you’re going to play ball games in the fall when it’s wet.”

The most important stop came before the final drive against Valley after trailing by seven.

Derrick Posey strung together a great sequence of hard runs, and a beautiful pitch and catch from Winston Sims to Ra’heem Moore secured a late-game touchdown and the lead, following an equally successful two-point conversion.

But a Valley hail mary—thrown with barely a second remaining on the clock—found its mark for a miracle touchdown that led to Greenville’s 13-8 loss.

With barely time to register what had happened, the Tigers were then thrown into a second contest with Robert E. Lee High School.

Meanwhile, the Greenville offense continued its struggles well into the second match, as a buckling offensive line allowed a number of defenders to take more than a few shots at Sims.

The pressure culminated for Sims in a late-game interception thrown to the flats, resulting in an interception taken back for a touchdown.

To add injury to insult, Brian Hill was hurt in the play and subsequently lifted off the field after several minutes.

Posey gave the Tigers another shot to tie the game with a series of spirited runs to bring the ball to the 11 yard line with 11 seconds to spare, but a questionable no-call in the end zone punctuated the Tigers’ 7-0 loss.

Though the pair of losses was tough to watch for Plott, it did give him an opportunity to see how his team would respond to adversity.

“I thought they came out in the second game and responded well,” Plott said.

“We just going to work hard this summer, hit the weight room, condition and continue playing our offense to prepare for week one of the season.”