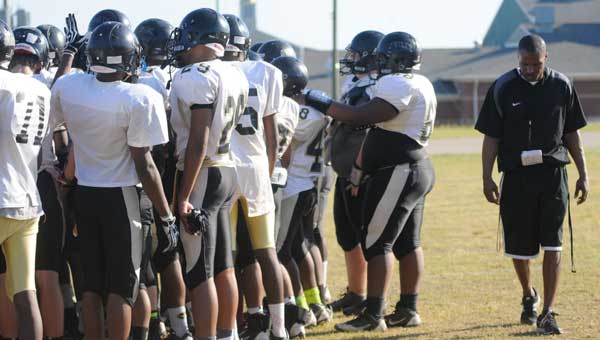 Amid a sea of new faces on the sidelines for the Greenville Tigers this fall, none will stand out as much as new head football coach Patrick Plott.

Hot on the heels of a perfect season with his previous school, the 2013 state champion Pickens County High School Tornados, Plott’s shift to Greenville has been a whirlwind of hurried preparation for the ensuing season.

And for a number of reasons, it hasn’t been an easy one.

“It’s been a transition in the fact that I came in so late and trying to get spring practice in,” Plott said.

“Every since I’ve been here, I’ve been going and I’ve been busy trying to get everything in order and situated how I like it.”

In the middle of that rush, Plott was blindsided with one rather unexpected problem—120 students suited up for this year’s spring training.

Unfortunately, there may not be suits for all of them, as the football equipment is being dispersed as evenly as possible among all players.

But for Plott, this is the best kind of problem to have, even if it’s one that he’s altogether unaccustomed to dealing with.

“That aspect is also different for me; where I come from at Pickens County, we didn’t have that many kids,” Plott added.

“But that’s where you need your assistant coaches to step up, and so far it’s going pretty good.”

But this year’s spring training is as much of an evaluation process for coaches as it is for players.

There are a number of things subject to change in terms of what the Greenville High School football team will look like once the stadium lights illuminate Tiger Stadium in the fall, and that includes the final coaching staff.

“I’ve got some guys who were already here helping me out this spring, and it gives me a chance to evaluate those guys,” Plott said.

“And I’ll get me a staff together once spring is over.”

The other staff—his players—is shaping up nicely, according to Plott’s reports from week one.

Monday marked the team’s first full week in pads, and Plott said that he was satisfied with the positive reaction to physicality.

On the other side of the ball, there are currently three contenders vying for the quarterback spot: senior D’raylen McGrew, sophomore Brandon Simmons and junior Winston Sims.

All do something a little different, and Plott said that he’ll continue working the three of them throughout the spring and summer to see who wins the job.

And ultimately, that approach sums up Plott’s approach to this season—it’s clear that this isn’t a one-and-done process, but a continuous one beginning in the spring and not ending until the final game of the season.

“We want to go out, get our system in and get better each day.”
The Tigers will have an opportunity to test those skills Friday against Valley High School and Robert E. Lee High School in a spring jamboree beginning at 6 p.m.
The teams will each play each other for one half of a regulation game, with the Tigers being scheduled for the second and third match of the night.