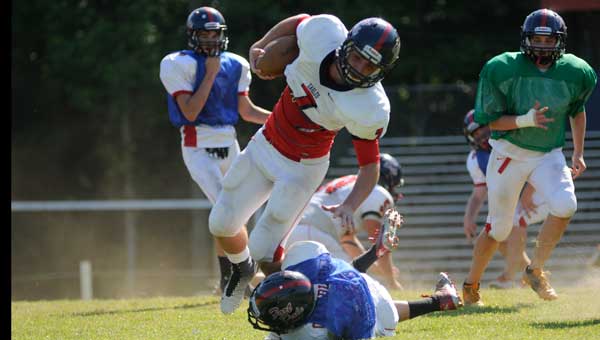 John Chambliss wraps up Sawyer Kendrick during Monday’s afternoon practice. This week marks the second of three weeks the Eagles have to prepare for next week’s scrimmage against an undetermined opponent.

But the Eagles’ first week back on the gridiron was strangely reminiscent of a classroom as head football coach James “Speed” Sampley began the process of teaching a brand new offense and defense.

First on Sampley’s itinerary are the two Ts—timing and terminology.

“We’re going to run a double wing-T principle, and defensively we’re going from a 3-5 to a 4-3,” Sampley said.

“It’s a little slow; we’re installing a new offense and defense, so it’s a little different than what we’ve been doing.  But the timing and terminology are coming along, and that’s what we’re trying to do.”

Sampley added that his decision to adopt a new offense and defense stemmed from a number of personnel changes prompted by the graduating 2014 class.

Three of Fort Dale’s starting offensive linemen are graduating, as well as Chase Whiddon, a three-year starter at linebacker.

The Eagles will be missing another three-year starter at the quarterback position in Chip Taylor, but Sampley might’ve already found a suitable replacement just one week into practice.

“Austin Vickery will be our starting quarterback, and he’ll be fine with that,” Sampley said.

“He worked the whole year last year as backup quarterback and he played in several games. The offense is different so he’ll have to do a few things differently, but he’s going to be quite good at what we’re doing.”

But the physical aspect of spring training is only a small part of what Sampley hopes his players take away from the next three weeks.

More than the conditioning, the weight training or learning assignments, he’s looking for up-and-comers to fill some rather large cleats.

We’ve got several kids in the senior class that we’re going to miss from a leadership standpoint,” Sampley said.

“We have a turnover, just like everybody else in the state, and it’s just a rite of passage.  Some of these younger guys have to step up and be better players when the older ones leave.”

With roughly half of Sampley’s given 15 days expired, the Eagles don’t have the luxury of time to adjust.

A scrimmage scheduled against a yet unknown team is slated for next week, but Sampley is confident that his players will pass this first test.

“We’re trying to get the timing—we need timing and terminology right now, and we’ll be all right.”