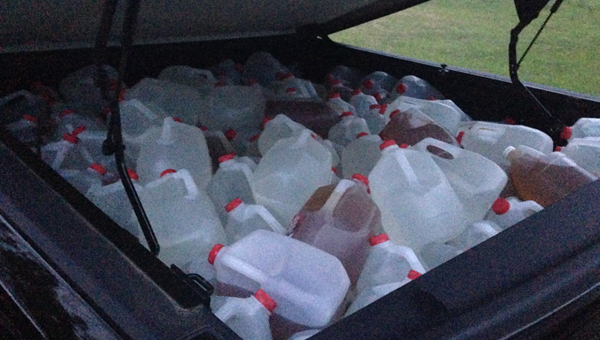 April has been a bad month for moonshiners in Lowndes County.

He said agents called the bust one of the task force’s largest seizures of illegal spirits ever in Lowndes County.

Andrew Peak and Ronald Hardy were arrested and transported to the John Hulett Detention Facility in Hayneville and charged with possession of moonshine and possession of an illegal still.

Lowndes County Sheriff’s Office personnel said Peak is 70, of Minter, and Hardy is 50, of Tyler.

Argo said the raid took place at Peak’s home, located off of Lowndes County Road 7 in the Minter Community, near the Dallas County line and Lowndes County Sheriff’s Deputies were called to the scene to assist.

Argo said agents acted on a tip and located what appeared to be an illegal still in the woods near the Peak residence.

“Rather than moving immediately, the task force set up a surveillance operation, which lasted several weeks,” Argo said.

“After Agents observed the two men carrying numerous plastic gallon jugs from a nearby shed into the home, they initiated the raid.”

He said the still consisted of 10 barrels and had been operational for some time. He also said the still was destroyed and about 10 gallons of finished moonshine were found.

Once Hardy and Peak were in custody, Argo said, agents asked and received permission from Peak to search his home.

Once inside, he said agents confiscated 183.5 gallons of illegal spirits, packaged in what appeared to be brand new 1-gallon, clear plastic milk jugs.

He said the Moonshine Task Force’s seizure of a total of 193.5 gallons of moonshine, estimated to have a street value of about $5,800, “is believed to be one of the largest in Lowndes County.”