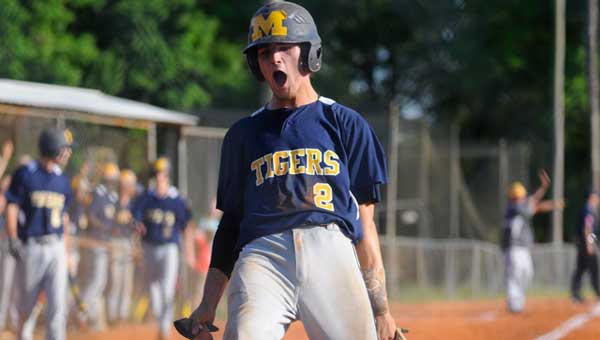 Harper Vinson celebrated as he crossed home plate to bring the McKenzie Tigers to within one run in the eleventh hour of the Tigers’ third matchup with the Fruitdale Pirates.

In the first two meetings of the three-game series between the McKenzie Tigers and the Fruitdale Pirates, it was all offense.

The Tigers allowed 16 runs in their game one loss and the Pirates conceded 14 of their own in McKenzie’s strong response in game two.

But for game three, McKenzie head coach Tony Norris had a plan to slow things down.

“They were pretty good at hitting the fast ball, so I threw a ninth grader to throw them off a little bit,” Norris said.

“Chris Shufford has a really good curve ball, and I threw him yesterday to try to keep them off balance.  And for all but one inning, that worked.”

McKenzie came off a run in the bottom of the first inning looking for another one of Norris’s patented three-up, three-down, shutdown innings; and for a while, it looked like the Tigers might succeed.

But with two outs and a runner on first for McKenzie, the Tigers’ shortstop missed a potential double play to close the inning as the ball sailed between his legs.

It was a mistake that would haunt them, as the Pirates rallied and escaped the inning with four runs.

And though Shufford recovered at the mound, the McKenzie offense found it difficult to get started for the next five innings as every hit found its way to a Fruitdale player, ending innings two through six before they had a chance to properly begin.

“One thing I stress to my guys is to put the ball in play,” Norris added.

“Yesterday’s game was the first time all year long where we played 21 outs and we didn’t strike out one time.

“Sometimes, baseball is an unfair game; you hit the ball, you do what you’re supposed to do and it just happens to go to people and they make the play.”

But in the final inning, Harper Vinson and Jeffrey Fuller connected at the plate to pull McKenzie to within one.

A catcher’s error at the plate allowed Fuller to steal third base, leaving only 90 feet between the Tigers and their next score to tie the game.

But Fruitdale opted to walk Roscoe Moorhead, taking the senior’s chance to turn things around out of his hands.

A short hit to the pitcher’s mound ended the Tigers’ comeback and the game at a narrow margin of 4-3.

Though the loss was a bitter pill to swallow, Norris was proud of his players’ performance throughout the game, and he’s excited for what next year could bring.

“I told my guys that us losing in the first round of the playoffs does not put any damper on what this team has accomplished,” Norris added.

“I’m going to lose some key parts, but I think I’ve got young talent coming up and I’m excited about developing that talent and the baseball program here at McKenzie.”