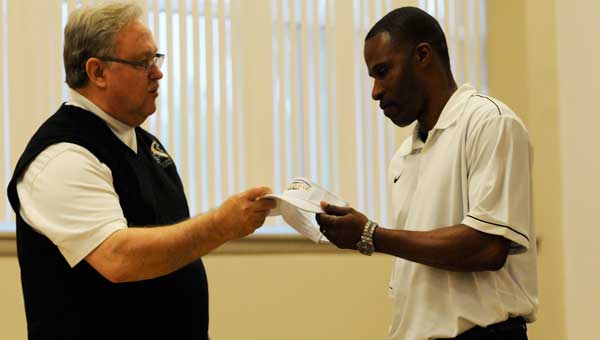 Principal Joseph Dean and his committee of six recommended Coach Patrick Plott to the Butler County Board of Education to unanimous approval Thursday night.

Dean and the committee narrowed a pool of hundreds of candidates down to 74 highly qualified applicants, and then further shortened the list to just nine interviewees.

“It was a daunting task, but I assure you that these gentlemen gave an incredible effort, and I think we’ve found someone to lead us and be the new face of Greenville High School athletics,” Dean said.

Each committee member was allowed a total of four points per interview, giving each applicant a total of 24 total points possible.

Plott finished the interview process with 24 out of 24 possible points.

Plott, husband of former Greenville native Makia Bennett Plott, comes from Pickens County High School, where he led his team to a 1A state championship with a record of 15-0 in 2013.

Plott said it was a desire to uphold Greenville’s standards that attracted him to the position.

“It was just the tradition here at Greenville,” Plott said.

Plott added that his list of short term goals lay not on the field or in the weight room, but in the philosophies of his players.

That, Plott insisted, is where the game truly begins.

“I want to establish discipline within the guys,” Plott said.