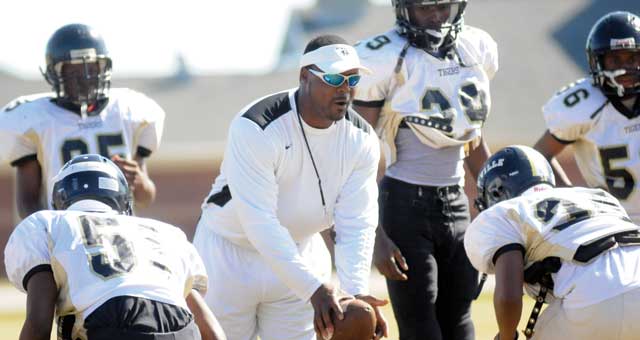 Former Greenville High School head coach Earnest Hill submitted his letter of resignation to the Butler County Board of Education on March 31.

Greenville High School principal Joseph Dean has conducted interviews with a number of candidates from all walks of life in the wake of former head football coach Earnest Hill’s resignation, and it’s a prospect that is very nearly a full-time job in and of itself.

“To be totally honest, it has been a daunting task, but a task that I feel that’s well worth it,” Dean said. “We’ve actually considered everyone that has shown interest in us.  We’ve had a plethora of applicants with a wealth of experience and everyone from new coaches to 25-30-plus year coaches have applied for the position.  A lot of coaches are native to this area, and some only know of Greenville from the opening for the position.”

As a group, the committee will reach a unanimous decision to select one candidate from the 10 applicants to offer the position.

But a winning season isn’t the only criteria Dean and his committee are looking for in a new head coach.

“For any coach, we’re looking for someone that can serve as a father figure for a lot of young men and young women that will be involved in Greenville High athletics,” Dean said.

Another case for a speedy decision concerns plans for spring training, as well as the previously scheduled spring game slated for May 9.

Whether the game will be played is a determination that the new coach will make, once a consensus has been reached.

Following the necessary background and reference checks, Dean and his committee are looking to have a hiring recommendation ready for Butler County Superintendent Amy Bryan to suggest to the Board of Education by Thursday, but that timeline isn’t yet set in stone.

“I’m not going to say it’s not, but every passing moment I’m hoping that we can expedite the process to get someone in here as soon as possible to get the program back going and give these kids a plan of action moving forward.”