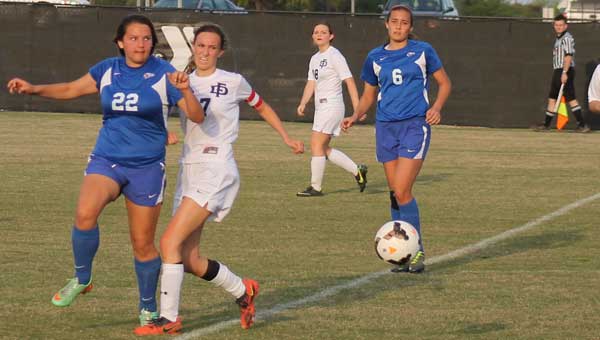 For 34 minutes, the Fort Dale Academy girls’ defense was an impenetrable steel curtain, discouraging every shot sent its way.

But with 5 minutes and 34 seconds remaining in the first half, rival Macon East found a chink in the armor, scoring a shot that bounced off the hands of the goalie for the one and only score the Knights would need to send Fort Dale home in the semifinal round of postseason play.

The second-round loss marks the third loss to Macon East on three meetings this season.

FDA head coach Andrea Skipper said that despite the excellent defensive play her team displayed in the first half, the Eagles ran into a wall of their own on the offensive side of the ball.

“During the first half, our girls played very hard—with determination and dedication—and in the second half, as well,” Skipper said.

“It just seemed like we did have several shots in the first half, but they were not lucky enough to go in the goal.  In the second half, we just could not get anything.  The girls played hard and gave it their all, and I guess that’s all we can do.”

It certainly wasn’t for a lack of effort, as the Lady Eagles spent their bye week on conditioning to accommodate for the wider YMCA soccer fields that hosted the semifinals.

But the loss hasn’t discouraged the Lady Eagles’ goal-oriented nature.

Skipper tasked her players with two goals this season: the first was to become back-to-back regional champions, and the second was to make it to the state semifinals.

“We were lucky to get a bye, and we made it to the semi state finals, but to me that was a win in our book,” Skipper said.

“We set those goals and we achieved those goals, and to me two years in a row shows that the program is going somewhere.”

Moreover, senior Molly Boutwell is the only Lady Eagle that won’t be making a return in 2015.

And though Skipper said her presence will be missed, she is already looking toward setting new goals for next season.

“Overall, I’m thankful for the opportunity to be able to work with a great group of girls who are willing to put in the time and effort to make the program a success.”