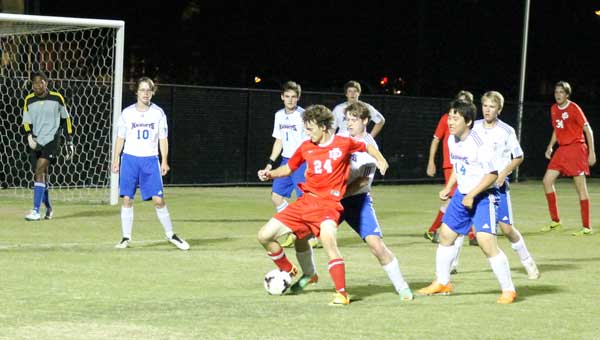 Jake Gillem sails past a sea of defenders to put points on the board for Fort Dale. (Contributed photo)

The saying goes that close only counts in horseshoes and hand grenades.

But for about half an hour, Fort Dale Academy would’ve liked to add soccer to that list.

The Macon-East Montgomery Academy Knights eliminated the Eagles in the second round of the postseason by a margin of 2-0, but it wasn’t without a hard-fought battle.

Unfortunately for the Eagles, it was a battle that was won largely in the first half.

The Knights scored their first goal with 19:50 to go before halftime, and again barely two and a half minutes later on a well defended shot that sailed just over the head of FDA goalie Taylor Thomas.

A stalemate became an uphill climb in minutes, and FDA head soccer coach Josh Wildermuth said that it ultimately boiled down to a force that neither team had much control of—luck.

“It was a pretty even match, for the most part,” Wildermuth said.

“They were able to get behind our defense—we were kind of playing a little bit shorthanded on defense—but they got behind us and scored two goals on us.

The two-goal deficit placed the Eagles in a do-or-die situation, similar to a previous meeting with Macon-East earlier this year in which the Eagles found themselves trailing 4-0, but the second half offered an opportunity to turn things around.

Offense proved the best defense as the Eagles changed to a scoring-oriented formation and kept the ball in enemy territory for a majority of the second half, bombarding the Knights with a plethora of shots.

But none of those shots found their mark.

“We pretty much kept the ball right there in front of them and we had shots that were within six inches of going in,” Wildermuth added.

“But we just couldn’t get anything to fall in for us.  Luck just wasn’t on our side that day.”

Overall, Wildermuth said that it was a performance that he and his players could be proud of.

More importantly, it was a true team effort—every FDA player contributed Friday night in a meaningful way, due to early injuries in the first half.

“There were a lot of people that got a lot more playing time than they normally would’ve because we needed them, and every one of them went out there and gave me 110 percent,” Wildermuth said.

“I couldn’t ask anything more of them.  We tried, and we did not conquer, but we did put everything on the line for it.”