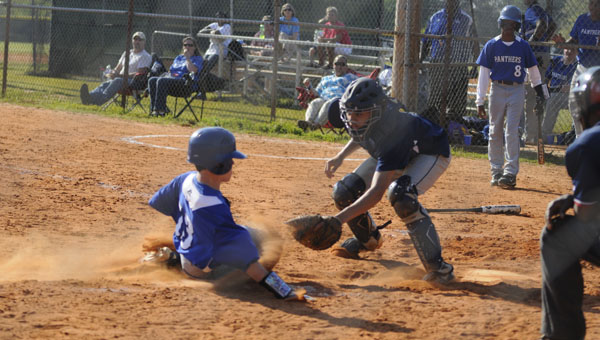 It was a battle of David-and-Goliath proportions as the McKenzie Tigers proved too much for a young and inexperienced Georgiana Panthers baseball club to handle Thursday with a convincing 20-2 win.

The Tigers ran away with the contest early by putting on a scoring clinic at the plate, recording 14 runs in the first three innings of play alone before Georgiana could mount a response.

McKenzie head coach Tony Norris contributed those early runs mostly to the patience of his players.

“They kind of walked us a lot in that first inning, and then we got some hits, so that started driving in runs there,” Norris said.

“But the biggest thing is that we didn’t take pitches out of the strike zone.  I try to teach strike zone discipline, and they did a good job of that.”

Early struggles on the pitcher’s mound put the Panthers on their heels for much of the third inning, but freshman Zeke Powell posted an RBI in the fourth to provide Georgiana with a much-needed shot in the arm.

Powell’s heroics continued by stealing home for his team’s second run, but Jackson Edwards’ second attempt at stealing a run failed to find success and cut the inning, and Georgiana’s momentum, short.

Fatigue began to set in during the fourth inning for seventh grade Georgiana pitcher Chase Black as McKenzie put the game further out of reach with six more runs.

Despite what the scoreboard would suggest, Georgiana head coach Ken Hamilton said that he is proud of his young team, which is composed of two seventh graders at second base and right field, an eighth grader at left field and a ninth grader at third base.

“I am so proud of how our youth battle physically superior teams game-in and game-out,” Hamilton said.

“About once or twice a game, we have that proverbial spark; however, it’s not consistent at this point in time.

“But we are sacrificing with youth and inexperience now in order to be at a highly competitive position down the road.  The best part is my players are getting tremendous varsity experience at a young age, and they will only get better.”

2014 has not been an easy season for the Panthers, as Hamilton had to dismiss five upperclassmen from the team during the season for poor attitudes and a less-than-desirable work ethic.

But Hamilton is already looking toward the future with his current crop of young players; off-season summer workouts, summer leagues and more are in the works toward building for a better campaign next season.

“The future is bright,” Hamilton said.

“We are taking it on the chin right now, but we are getting better and better.”

The Panthers aim to end the season on a positive note with Tuesday’s matchup against Pleasant Home at 3:30 p.m., and then at Central-Hayneville on Wednesday at 4 p.m.

The Tigers face Highland Home on the road Monday at 4 p.m., and will greet Red Level at home on Tuesday at 4 p.m..

The Tigers also host the first round of the playoffs against Fruitdale.