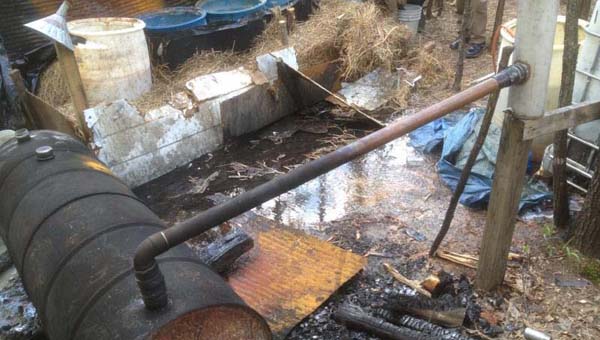 Two moonshine stills located near the Collirene Community were destroyed Tuesday by agents with the Alabama Alcoholic Beverage Control Board and deputies with the Lowndes County Sheriff’s Office. (Courtesy Photo)

Dean R. Argo, government relations manager for the Alabama ABC Board, said Henry Rudolph and Derry Andrews were arrested.  According to Lowndes County Sheriff’s Office personnel, Rudolph is 60, of Collirene, and Andrews is 53, of Letohatchee.

Argo said Rudolph and Andrews were transported to the John Hulett Detention Facility in Hayneville and have been charged with possession of an illegal still.

“ABC Agents and Lowndes County Sheriff’s deputies located the stills about two months ago, but waited to move in until more information could be gathered and suspects identified,” Argo said.

According to Argo, the first still was capable of cooking 19 barrels of mash and agents seized five gallons of finished moonshine.

He said the second still, believed to be constructed and operated by the same persons, was capable of cooking 15 barrels of mash.  However, no finished product was found at the second still.

“Both stills were operational,” Argo said. “Agents believe that the suspects had tapped into county water line and stole water to use in the cooking process. The Lowndes County Water Board is also involved in the investigation and has not determined whether it will pursue charges.”

“It is illegal to steal water,” said Orbuty Ozier, chairman of the Lowndes County Water Authority. “There was a legislative act passed years ago in reference to this. And we will follow what the law says we must do in order to preserve our water and protect the water system.”