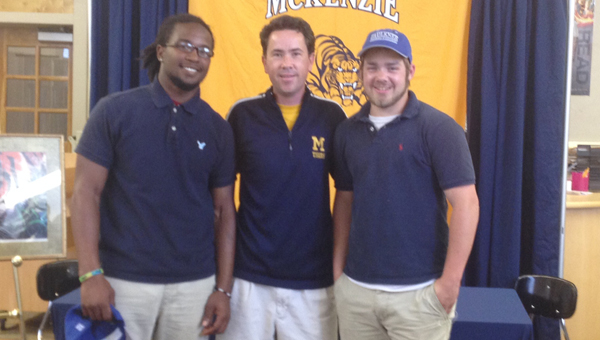 Running back Anthony Grace and linebacker Jeffrey Fuller were both offered scholarships to play football at Faulkner University after attending an unsigned senior combine that was held during the first Saturday of spring break.

Grace and Fuller were two of more than 100 athletes from around Alabama and neighboring states in competition for a chance to play football at the next level.

McKenzie head football coach Josh McLendon learned of the opportunity via an email, and said it was something he knew he had to follow up on.

“I was really interested in trying to get these kids somewhere to play at the next level,” McLendon said. “I think it’s important that these young men not only further their education, but if they have an opportunity to play at the next level, I’m going to do whatever it takes to give them that opportunity.  It’s a privilege and an honor to coach these young men. They’re just a joy to be around each and every day, so it’s just something that’s really easy for me. It’s an honor, really.”

The duo participated in a gauntlet of events, including the 40-meter dash, position-specific drills, weight lifting and others.

Fuller and Grace were excited at the prospect of testing their physical prowess against other athletes even more than testing their own limits.

“I think it was a good experience and a great challenge for us,” Grace said. “There was a lot of competing going on, and there were a lot of guys there, so we just had to do what we do.”

Fuller added: “It was good seeing some of the players that we play against, too. I was in the linebacker drills with one of the guys from Loachapoka, and it was cool seeing how they looked at our film and saw how we played and recognized some of us.”

The combine offered more than an opportunity for the pair to show their skills, but it also showed them a glimpse of the facilities and coaches that they would be working with in the fall.

According to both, it’s a decision that they’re happy with.

“I think Faulkner is a great school, and it’s the type of school that I’d like to go to — it’s a great Christian university and the coaching staff just seemed intense and the type of people I’d like to be around,” Fuller said.

“I liked their facilities,” Grace added.  “They had a lot of stuff going on out there, and the coaches seemed really excited, and they matched my intensity, and I just like to be around folks like that.”

Even while looking ahead to an exciting future, the duo is equally remorseful about the good times they leave behind at McKenzie.

“Mostly, I’m going to miss my coach,” Grace said.  “He’s my favorite coach I ever had in high school football.”

Fuller added that despite transferring from Greenville to McKenzie, he feels like he’s been a member of the family all along.

“Everybody knows everybody and everybody loves everybody,” Fuller said.  “On Friday nights, the whole community came out and I’ll miss that because I know everybody had our backs. It was just one big family.”