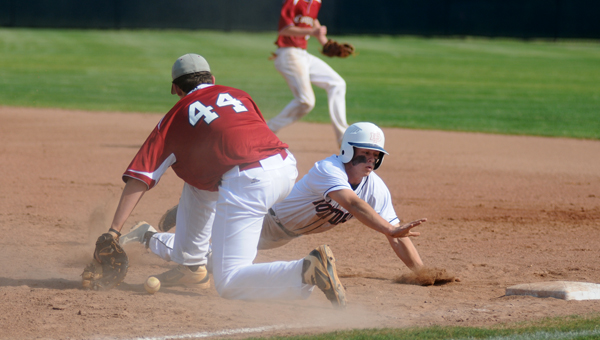 Fort Dale Academy scored a 6-4 win over Escambia Academy Thursday, and with it a home playoff series.

The previous playoff series was played at Greenville’s Beeland Park.

“It means a great deal to us because we play so well at home,” said FDA head coach Josh Beverly. “We will have a great crowd and it’s a great thing for our program to host a series.”

The Eagles rallied from a 2-0 deficit Thursday to notch their 15th win of the season.

After three-up-three-down first inning, Fort Dale erupted for four runs in the bottom of the second inning.

James Burkett started the rally by drawing a one-out walk.

He then scored on an RBI single by Austin Vickery, who along with Blake Harris, would score on a single to center field by Kenny Harden, Jr.

Brady Clark also scored in the inning to give Fort Dale a 4-2 lead.

Despite plating four runs in the inning, Beverly said he still feels like his team isn’t quite at sync at the plate.

“We pitched pretty well and played pretty decent defense, but still aren’t hitting the baseball,” Beverly said. “We hung in there and played hard and got a tough region win. Sometimes it doesn’t matter how it happens as long you get the win.”

Vickery finished the game with three RBIs on the strength of a 2-for-3 effort at the plate.

Harden was 1-for-2 with two RBIs. James Burkett, Chip Taylor and Harris each had a hit for the Eagles.