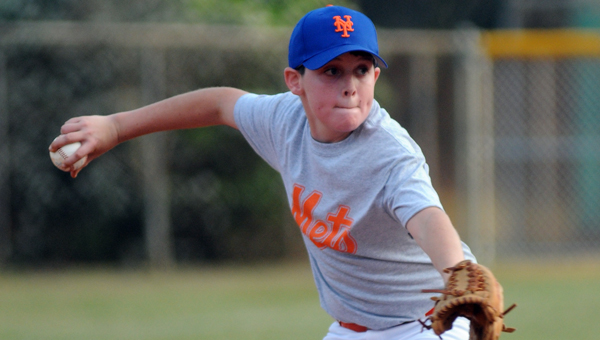 Pitcher Andrew Williams fires the ball to first base during the Mets’ 14-5 win over the Orioles Tuesday night at Beeland Park. (Advocate Staff/Andy Brown)

The Mets rallied from a 5-0 first-inning deficit to score a 14-5 win over the Orioles in the opening game of the Dixie Youth season Tuesday night at Beeland Park.

The Mets pounded out six extra-base hits in the victory. Evan Clark led the charge with a 2-for-2 effort that included a pair of doubles and two runs scored.

Austin Williams, Daniel Palmer, Wyatt Fullington and Trace Thomas each had doubles for the Mets.

Palmer finished the game 2-for-2 at the plate.

The Orioles were led by Damarcus Smith’s 1-for-2 effort that included a double and a run scored.

Baron Brock was also 1-for-2 with a run scored in the loss.

The Rays opened their 2014 campaign with a 12-2 win over the Yankees Tuesday night in Dixie Youth league action.

The Rays were paced by Trevor Haney, who pounded out two hits and scored three runs.

Jamar Jackson, Erik Rudolph, Austin Raines and Caden Coker each had a hit in the win.

Brice Acreman, Moe Moseley and Bradey Peavy were each 1-for-2 at the plate for the Yankees. Mosely and Acreman also scored a run each.

The Reds edged the Braves 3-0 on March 31 in Dixie Minor league play.

Brady Cartwright was 3-for-3 with a run scored to help power the Reds’ offensive charge.

Channing Beverly was 1-for-3.

Trey Little and Lawson Conway each scored a run in the win.

Jacob Nichols picked up the lone hit for the Braves.

The Rangers slipped past the Red Sox 9-8 on March 30 in Dixie Minor league action.

Turner Patterson was 3-for-3 with three runs scored and an RBI to pace the Rangers.

Ford Sloan, Jacquez Adams and Lucas Elliott each had a hit in the win.

Jacob Foster led the Red Sox with a 2-for-3 effort at the plate and two runs scored.

Riley Nichols, Dylan Smith and Everette Black each had a hit in the loss.

The Red Sox topped the Reds 4-3 on March 20 in a Dixie Minor League showdown.

Dylan Smith and Braxton Kimbro each had two hits to pace the Red Sox. Kimbro also scored a run.

Brady Cartwright had the only hit of the game for the Reds.

Cartwright, Channing Beverly and Tanner Disney each scored a run in the loss.

The White Sox scored a 7-5 victory over the Rangers March 20 in Dixie Minor League play.

Christian Hill led the White Sox attack with a 2-for-3 effort that included a pair of doubles, two RBIs and a run scored.

Lucas Elliott, Jacquez Adams, Trey Myrick, Garrett Simmons and Tad Smith each had a hit for the Rangers.

Stats courtesy of the Greenville Parks and Recreation Department.